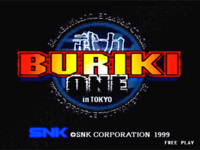 Buriki One (Buriki One: World Grapple Tournament '99 in Tokyo) is a 3D computer graphics arcade versus fighting game. It is an offshoot of the Art of Fighting series . In the brief time-frame of the Hyper Neo-Geo 64's popularity, it was characterized for its superb graphics that processed at a smooth 60 frames per second and a unique fighting system. So far, it has only been released in one iteration, with no sequels, although the main character Gai Tendo has appeared in later SNK games, via cameos or as a playable character (in the recent The King of Fighters XI). Buriki One is also the last game to be released for the Hyper Neo-Geo 64.

What is the strongest form of combat? Who is the mightiest fighter? The time has finally come to settle this never-ending dispute. Spring 1999. The mightiest fighter of the 20th century will be decided. SNK announces the opening of Buriki One-World Grapple Tournament '99 in Tokyo, the battle royale of fighting styles. Matches are decided by a single fall. As for rules on elbowing, backhand slaps, head butts and kneeing...there are none! So, any dirty tricks you've mastered are yours to unleash. Contestants must win a total of 8 matches, passing through the preliminary and finals leagues within a single day. In addition to the strength of a tempered body, only those furnished with the stamina and self-discipline can obtain the blessings and laurels from the Goddess of Victory. This is truly the biggest battle royale blowout for the tin de siecle. A final declaration: Who's "The Mightiest"? Buriki One will decide!

The setting for BURIKI ONE is Spring 1999 (20 years after Art of Fighting 3). Crowds flock to an arena known as the World Grapple Tournament, where various fighters compete for the championship. The only returning character from the Art of Fighting series is Ryo Sakazaki, as 10 other fighters of different fighting arts enter to be the champion of the tournament. And at the final of tournament, a dark fighter known as Silber appeared.

It's Spring 1999... Fighters from across the world gather at the Tokyo Dome to compete in the World Grapple Tournament. Each contender has their own fighting discipline, ranging from the popular styles of Boxing, Karate and Professional wrestling, to the lesser known arts of Aikido, Tai chi and Muay Thai. Finally, they have the chance to prove which martial art conquers all!

Buriki One is the fourth and final 3D computer graphics fighting game released for the Hyper Neo-Geo 64 system. Buriki One's control system uses two buttons for movement, keeping the player on a 2-D axis, despite the 3D arena. Pressing the left button moves the character in the left direction, pressing the right moves in that respective direction. Double tapping each button produces a dash in each corresponding direction for evasion and closing distance. Pressing both buttons makes the character block.

By using the joystick, the player can execute attacks of varying damage levels. By pressing in the forward direction, the player executes a medium attack, up forward a stronger attack, and down, forward is the weakest, but fastest attack. By combining various combinations of the movement of the stick, a special attack is performed for increased damage. Unlike the 2-D iterations, however, no ranged attacks are present, keeping the preferred fighting distance between players at close quarters. 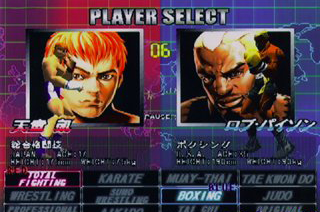 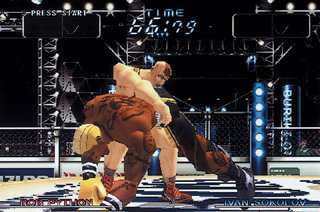 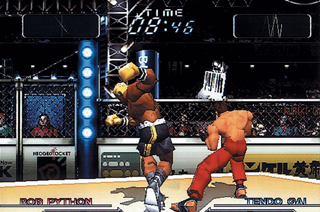 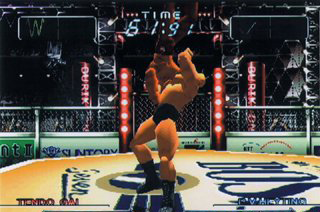 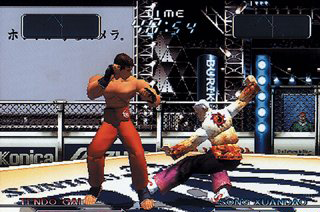 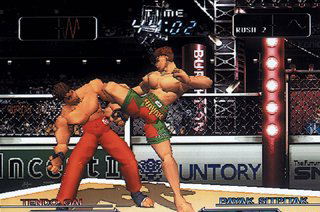 Here you can see the complete intro for Buriki One.

Here you can see a gameplay sample.

Here you can see the unusual control panel for Buriki One. Movement buttons on the left and attacking joystick on the right.

Please keep in mind that these are the "published" move sets by SNK. There are more advanced move sets that you will learn when playing the game. The ones posted are my own.

= Heavy Attack (Hold about 2 seconds, you have to get a feel for it) (If first move in combo string, you have to hold

- = Usually indicates a counter attack or pause. First you execute the moves before the "-" and then perform the move after it when you "grab" the opponent

After choosing your character you will be asked if you want the "Second System" on or off. The second system is basically a Heads Up Display (HUD) that "suggests" your next command. Keep in mind that the second system will only suggest basics moves. If you want to perform another advanced move you can do so by entering in a different command. So in short you can use it in the beginning but as you progress you might want to leave it off so you don't grow dependent on it.

Smack My Bitch Up

Pull Down (Up Toss)

Belly To Back Roundabout (After "Turn the Tables")