Yooooo, you all are going bananas! Love to see it! Scoreboard updates coming soon!

I've definitely formed some thoughts about which ship slays the hardest, etc. I'll post my thoughts on that soon too.

). The ship types basically map over to Donpachi ship types 1:1. The explosions sound pretty similar too. Seems like some ideas that would go on to kinda form the STG landscape were taking shape here.

On ship type - I think Type C is the most effective. If you hold button 1 down, you fire the laser type shot, which is very strong, but if you press button 1 rapidly, you fire a pretty brutal spread shot. This saved my ass a lot in later levels.

These are just my noob ass thoughts, so don't take 'em as gospel, but the popcorn enemies are likely what's going to take you out in the later levels, and they're often in the periphery. Type B wide shot sucks (and I think isn't even existent until you level up a bit), which increases the risk of getting popcorn'd even more.

Also, if I had to take a guess, I would say that Iceman is inspired by Yoshiki from X Japan: Ajax said:
Also, if I had to take a guess, I would say that Iceman is inspired by Yoshiki from X Japan:
Click to expand...

Had one last good credit last night before packing it in. If anyone wants a real quick 1-all, this game is it. Naturally it only gets nastier after that with savage suicide bullets... Got to the boss on 5 and ate a bullet…

So close to the clear! Be generous with your bomb use and you've got it in the bag. The game gives out plenty of bombs plus there's no score penalty I know of for using them, so bombs away.

Is 5 the last stage?

Neodogg said:
Is 5 the last stage?
Click to expand...

Yes, then it starts to loop from stage 2.

Get that 1 all Doggy!

Oh, also, I think we need to discuss how your ship literally fist pumps when you dump a bomb in this game: I feel like this pretty accurately captures the overall feel of the game, haha. Pretty dope! Too many ballers this month to hurt anyone. I'm gonna play hard tho. Ya'll were right about ship #2.

Five 1 alls in as many days of this SOTM. That's that shit @FREEMAN get your little faggot ass in here because this is one of the last good things about the forum. So pull up in your Mame Machine and play along.

Ajax said:
Also, if I had to take a guess, I would say that Iceman is inspired by Yoshiki from X Japan:

that guy is copying me and bon jovi

Let's tell him to stop 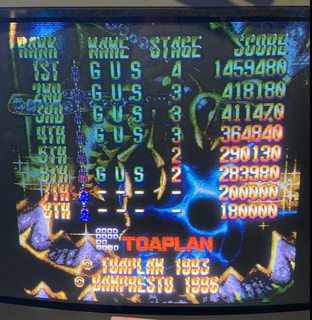