Sneak peek of two future NeoStore heroes for the landing page that are under development. I'm trying to think of some blue font text to go above the 'shop mvs' button. For the original Geese on throne hero already on the NeoStore, the blue font text says, "The Future is now!". Also considering mini marquees for the art above the 'shop mvs' button, or a combo of 3 of the current flyers shown and 2 mini marquees. Considered adding pink petals from the Japanese Cherry Blossom tree as seen here, but decided against it since I was told it would seem forced, unlike with Geese hero where both he and the accessories had clear flooring.

If anyone has has constructive criticism, please share your opinions/ideas. 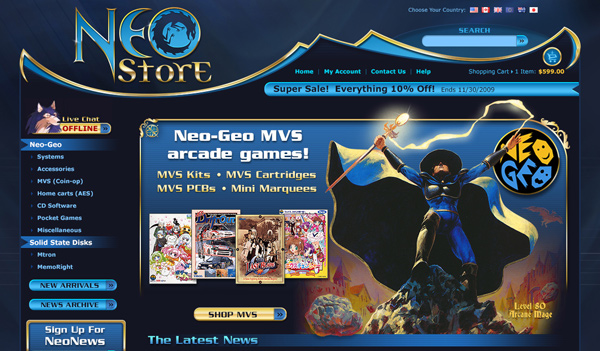 That would be a Twinkle Star Sprites motorcycle helmet! 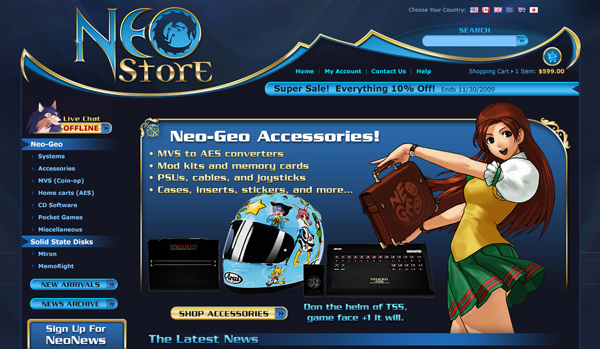 Dat MagLord image is the tits.

If you want to appeal to international buyers, get G-Mantle.
G

Xian Xi said:
If you want to appeal to international buyers, get G-Mantle.
Click to expand...

'sup with that Arai helmet?

Assuming you guys are being serious, G-Mantle seems quite plain and most people probably aren't familiar with this elusive character. Pac-man has more facial features after all. This Athena was seriously considered though.

@Wasabi: Replacement home cart cases should be restocked soon; I'll check into neo save master. Thanks.

Glad people like the Magician Lord, I agree that it was a great choice for a 'hero'. That was the first Neo game that I can recall seeing in the arcade. Was at the entrance to the Gold Mine arcade at the Mall of Memphis. Gold Mine arcade was in front of an ice skating rink... great memories. Shame that the Mall of Memphis became known as the notorious Mall of Murder has been closed for years. That entire zip code is urban blight now.


SSS said:
'sup with that Arai helmet?
Click to expand...

why? who? was a Shoei too Neo Geo Xish?

Shoei is a great brand. I had a pair of perfectly matching Shoei helmets for my CBR600 Smokin Joe that I had loved: That's not my pic, but it could have been the same bike I had because I notice the same after market Yoshimura exhaust, but mine definitely had a fatter rear tire. They could have changed tires I suppose.
S

Shawn said:
Shoei is a great brand. I had a pair of perfectly matching Shoei helmets for my CBR600 Smokin Joe that I had loved:

That's not my pic, but it could have been the same bike I had because I notice the same after market Yoshimura exhaust, but mine definitely had a fatter rear tire. They could have changed tires I suppose.
Click to expand...

when you gonna get this Neo Geo RC30 in stock?

This is the hand that launched a thousand batches.

I like the girls, specially "that" Athena. It never hurts to have cute girl heroes.

Hah! That Neo Geo RC30 looks like a 1/1 as well. I'm done with crotch rockets, and quite fortunate to have never wrecked because I almost never wore a helmet, usually just a pair of Mars Oakley sunglasses. Besides, I'm content with my NEO GEO license plate that I always renew, that's a 1/1 for the state of TN since all plates must be unique.

Other girl characters that were considered:
Sissy (I can get high resolution scan of this from manual):
http://img4.wikia.nocookie.net/__cb20131117092456/mugen/images/3/30/Sissy_promoart2.jpg

Ai from Neo Geo Battle Coliseum (she wearing a gaming system as a necklace but that could be changed):
http://www.fightersgeneration.com/nx8/char/ai-ngbc-victory-art.png

Ultimately, I decided on Kisarah Westfield from Aggressors of Dark Kombat for the Accessories hero because she was already holding an accessory (brief case) in such an ideally presentable fashion. At my request, the embossed Neo Geo logo was added by the designer wizard, Tim Zulewski, of Brand Labs. I noticed that Brand Labs still uses the NeoStore as one of their before and after web design examples:

I cant wait to check the site out.

Does the improved neo hero store come with improved prices on games?

Better scoop those mtrons before they're all gone.

Is there something you want to tell everyone?

Xian Xi said:
If you want to appeal to international buyers, get G-Mantle.
Click to expand...

I was thinking the same thing as well...

For the rest of this month (3 days), you can get 10% off anything found in the MVS (Coin-op) section of the NeoStore by using this coupon code at checkout: MVS10

​There are currently 96 unique listings found in the MVS section with more added daily, so be sure to check New Arrivals periodically.