Finally--a game that blends white-knuckle puzzle action with the glamorous world of...accounting! While the financial setup of Money Puzzle Exchanger might look boring at first, it's easily one of the better mind-twisters that the Neo-Geo has to offer. Whoever said "money is the root of all evil" never played this.

MPE combines the gameplay mechanics of the Magical Drop games with some lightning-fast coin-counting addition--call it "Mathical Drop." Instead of bubbles, MPE players (most of whom are presented as schoolchildren in pastel-colored fantasy costumes) stack coins that combine to make higher denominations--five 1 coins will turn into a single 5, two 5's become a 10, five 10's turn into 50 and so forth, on up to 500 (two of those will disappear completely). One-player games offer either solo endurance rounds or matches against a ladder of CPU opponents, but as with MD, it's the two-player mode that makes the game the most fun. 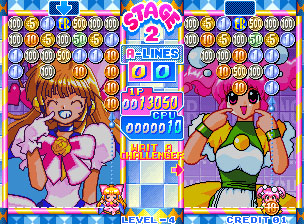 If you're familiar with Magical Drop II, the controls on MPE will feel instantly natural--they're essentially the same. They're just as responsive too--pull coins down with one button and toss them back into the puzzle with another, all at a fast pace. (If you try this game via MAME, be warned--there may be slowdown through your emulator, but there isn't any on the real MVS cart.) One nice tweak from the MD games is that coins do not always have to be stacked in a line to merge or disappear--as long as five (or, in some cases, two) of the same coin are touching on any of their four sides (diagonals don't count), a combo starts. Sideways stacking is the concession offered in exchange for the extra mental task of doing basic addition in your head while you play, and it's a fair trade-off. The mental math does make the game inherently harder than Magical Drop, though. 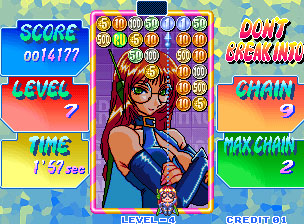 The graphics are cutesy-wootsey, full of people that look like they just stepped out of a Sailor Moon convention, or at the very least, a Sanrio shop. But that's the look the game was going for--pastel and friendly--so that's not a complaint. It's worth noting that, thanks to some creative clothing, a few of the female characters in the game are neither cutesy nor wootsey. Beyond that, it's just a 2D puzzler with a clean look and no special effects of note. 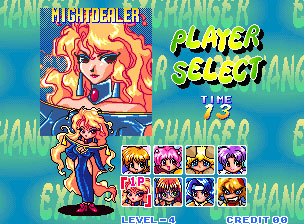 The audio matches the video--happy, poppy, non-threatening, pleasant-in-that-Japanese-pop-way melodies loop in the background while the characters utter the occasional adorable phrase (except for Mightdealer, whose laugh is downright annoying). Nothing exceptional but nothing too annoying. 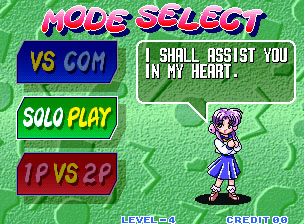 A game this weird has its own gravitational pull. It takes the core gameplay of Magical Drop and puts a unique spin on it, making it arguably more difficult than its bubble-bursting sibling--a good thing if you've aced MD and want to work new areas of your brain. 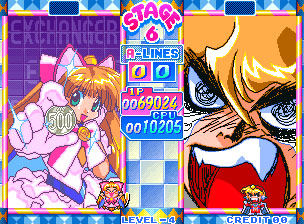 Money Puzzle Exchanger's approach can be summed up in three words: Cute! Cute! Cute! But don't let that scare you away. There's some exceptional puzzle gameplay lurking behind the cotton-candy exterior, and despite its numerous similarities to Magical Drop, it still feels like its own game. This Japanese-only MVS cart is a bit on the expensive side, but it's worth blowing the $100 or so if you really enjoy Magical Drop II or you're trying to teach yourself basic addition. After all...it's only money, right?