When is a sequel not a sequel? When it's trapped between a fully new product and an enhancement of an existing game. That's Metal Slug X's role in MVS history--but its identity crisis doesn't seem to have affected its gameplay. 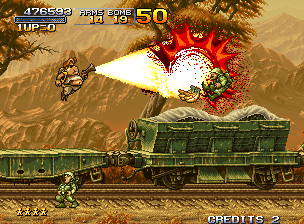 The go-right action game lives! Special forces operatives Marco and Tarma return to fight the evil forces of General Morden, but this time they're joined by two heroes of the female persuasion: Eri and Fio. Choosing one of the four characters, up to two players plow through six very large missions, full of hidden items, prisoners of war to rescue, and legions of enemy soldiers. You'll also find cool vehicles like the Slug Flyer and Camel Slug, upgraded and new weapons (including the homing-missile Enemy Chaser and the Iron Lizard, a rocket on wheels), different enemies (dig those mummified puppies during Mission 2) and alternate, enormous end-level bosses. Missions look familiar but play different when compared to Metal Slug 2; something's always changed, whether it be the appearance of an enemy, the time of day for the mission, the mission-end boss battle, or any number of other variables. Keep your eyes open for some sneaky secrets and the return of elements and characters from the original Metal Slug that didn't appear in MS2. 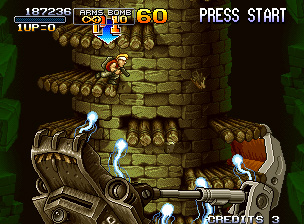 The characters respond very well to the controls; it's only firing a weapon while in one of the vehicles that gets tricky, since the joystick directs both your shot and your movement. This is characteristic of the whole Slug series, though, and players will get the hang of it with practice. The gameplay, however, is hard to find fault with--if you liked the original Metal Slug, there's far more of the frantic scrolling action from before, with the addition of more vehicles and tons of secrets to uncover. Yes, it's mostly running to the right while blasting everything in sight, but it's so well executed you might forget how simple and straightforward your tasks are. 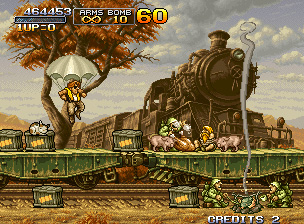 Part of what helps you get swept up in that basic gameplay is how it's presented. Metal Slug X shares the same cartoonish/slapstick presentation of its predecessors, with tons of smooth and funny animation. When they're not tiptoeing by, enemies sometimes scream and run the other way. Background characters amuse themselves nonchalantly despite the war raging around them. Eat too much food and your hero blimps out into a fatter version; one shot from an enemy will pop them like a balloon. The character design is unlike any other Neo game, and its distinctive and amusing style is one of the reasons why Slug games have such a rabid fanbase. Also, it's worth noting that the slowdown that plagued MS2 is more or less gone here. 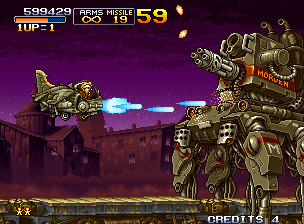 The soundtrack is pretty much brilliant. Each mission's music underscores the geographical location, from the Egyptian tombs of Mission 2 to the Chinese street market themes two missions later. The snazzy/jazzy tunes are artfully arranged and really drive the high-octane mood of the game. The robust sound effects of bullets, explosions, and enemies yelping their last yelp don't disappoint, either. 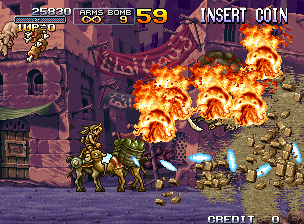 For a linear game, the replay value is unusually high. There's a lot of secrets to find, and even after completing the game, you'll probably feel compelled to go back and try to complete each mission with more rescued POWs, or poke around and see what hidden areas and items you may have missed. Plus, there's no way you can see all the little jokes and animations in one pass. 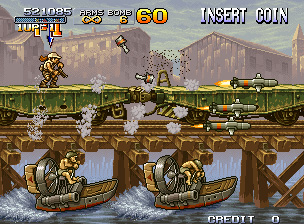 Metal Slug X is different enough in many small ways that if you're a completist, you'll still want MS2 in your collection. However, if you're simply looking for the best-playing game of the two, Metal Slug X outshines its closely related cousin with a simple formula of "more, more, and more." This really is 2D action gaming at its finest.