If there are two genres the Neo excels at, it's fighting and puzzles. Magical Drop II is one of the strongest examples of the latter--a fun, fast game that's just derivative enough to represent a fresh challenge to veteran puzzle players.

PREMISE: Why Do You Think They Call it Magical "Drop"? Most puzzlers don't fall far from the Tetris tree, and MD2 is no exception. Think "Tetris with bubbles but upside down" to start (wait, isn't that Bust-a-Move?) and throw in the ability to pull down, store, and re-stack those bubbles. Players (represented by a jester) can grab and then regurgitate as many bubbles as they like so long as they are all a matching color. Three or more bubbles of the same shade will blink and disappear, keeping the ever-descending puzzle at bay; as the bubbles shift after a disappearance, combos are created, removing huge swaths of deadly bubbles in multiple, cascading steps. Of course, when the bubbles drop all the way to the bottom, your jester won't have much to laugh about. Single-player contests feature a wide playfield and "escape tunnels" on either side of the playfield that let you wrap around quickly; two-player games feature much smaller puzzles, so there's no need for the getaway warp. However, doing well on your own side will cause your opponent's puzzle to fill up faster, so tactics will change between modes. 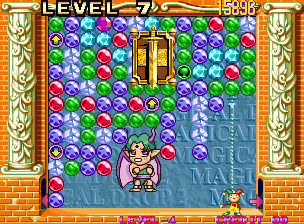 I'm a big fan of both Tetris and Bust-a-Move, but Magical Drop takes the cake for best gameplay. It's one of the most intense, harrowing puzzlers I've ever played. The descending puzzle is merciless, triggering huge combos (sometimes accidentally, though some players would never admit it), is quite rewarding, and especially in single-player mode, things can get unmanageable fast--and a good puzzle game should make you feel like you're always on the brink of disaster. The two-button control (one to pull bubbles down, one to toss them back up) performs wonderfully--your brain will start to fail before the controls do. As always in puzzlers, simplicity is best.

The game stars cartoonish characters based on Tarot cards--the Magician, The World, the Fool--and they're cute and well animated. That's about the high point of the visuals, because let's face it--there aren't a lot of frames of animation to worry about, there's no parallax scrolling, and the visual elements can't be distracting or else it would affect the gameplay. If you've seen Bust-a-Move, you've seen this. 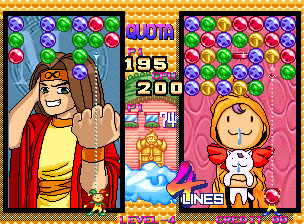 Characters feature little quips but you'll likely miss them (if you can even decipher them) while you concentrate on the gameplay. In the single-player Puzzle and two-player games, one lousy super-happy song will stick in your head all day. Thankfully, CPU matches feature character-specific music. But even with the repetition, it's not bad...you learn to like it, then you grow to love it, and then, in the final stages of madness, you realize there is no better song that was ever created. And then...then it's time to stop playing, really. 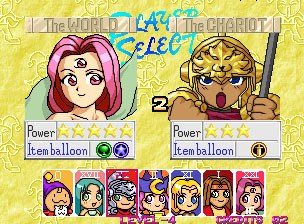 Once you get into the game's groove, the single-player game is fairly easy to beat; thankfully there are two skill levels to keep you challenged. As in Super Puzzle Fighter II Turbo, each character has different strategies, skills, and bubble patterns, so handicapping in two-player matches is easy. With just seven Tarot toons, however (a problem Magical Drop III handles nicely by upping the roster significantly), it's easy to fall into ruts of the same character vs. character matches. That probably won't stop players once they've been bitten by the MD bug, though. 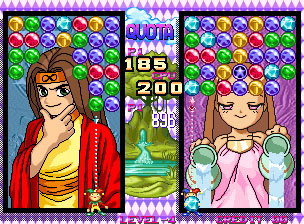 Magical Drop II has always seemed like an under-appreciated game, existing in the shadow of fan-favorite Bust-a-Move. And while its strategy is a little deeper, so is its reward. It's not a game for everyone--some will find the concept and mechanics difficult to grasp in comparison to the other well-known puzzlers--but it's a title that puzzle fans owe it to themselves to seek out and try for themselves.