It's hard to actually critique a game as seminal as the original Metal Slug--it's one of the best side-scrolling shooters ever made. That sort of sums up the review right there. Just know that there's a reason this series is spoken of in hushed, reverent tones, and that reason starts with this game. 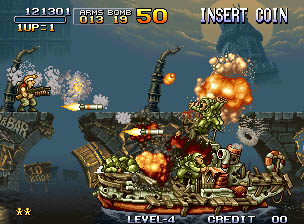 Premise:
Morden's a madman bent on world domination. Marco and Tarma are two bad-ass soldiers out to bring his reign of terror to an end. Armed with a bevy of rotating weapons, they'll track Morden through six levels of scrolling action goodness, mowing down his army all the way, aided and abetted by the powerful tank named Metal Slug. 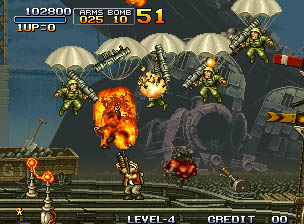 Gameplay & Control: 8/10
The controls are comfortably complex--8-way joystick movement combined with jump, shoot, and bomb. Rotating a turret while moving takes some practice, but once you get it down, it's no problem. The gameplay's a bit more straightforward--blow everything away, rescue POW hostages, and collect power-ups as you find them. It's a gleeful, old-school action game. In fact, for both gameplay and control, it's mostly standard stuff, just wonderfully executed. 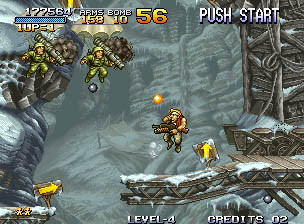 Graphics: 9/10
This would be considered a classic even if it didn't have the excellent gameplay--Metal Slug's visual style is one of the reasons it's so beloved. The cartoonish, exaggerated expressions of the characters and the oddly bulbous war machines give Metal Slug a unique look. You'll see some slapstick humor too, something most genre entries don't offer. There's a bit of slowdown here and there but only when the screen is filled with several sprites, such as explosions or swarms or enemies. It's quite manageable. You'll spot nice scrolling effects using detailed backgrounds, too. 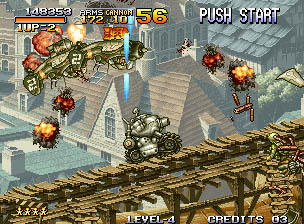 Sound/Music: 8/10
Heroic and hummable, together at last. The layered, rich soundtrack is brilliant, and it's only tarnished by the sheer repetition of enemy death screams--it's the same "Aaah!" over and over again. If you get used to that, well, no problem. 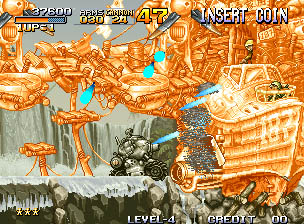 Replay Value: 8/10
Other Slug games addressed the replay problem with multiple paths and secret areas; in that respect, the original Metal Slug shows its age a bit. However, several players race to set high scores or fastest times, or see how far they can get trough the game without dying. In other words, the game is so much fun, you'll invent your own reasons to keep playing long after you've "finished." 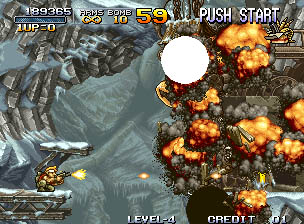 Overall: 9/10
Coming back to Metal Slug feels like returning to visit an old friend--it's just as good as you remember it no matter how long it's been since you last saw each other. Metal Slug is not only an insane amount of fun--it's also one of the best games to illustrate the genre, and among the best titles on the Neo, period.