After playing this game, two things became evident to me right away.

1) If the Neo Geo MVS/Cartridge format is on it's last legs, it's going out with a bang rather than a wimper and
2) SNK never ceases to surprise me.

Announced not 2 months ago as an MVS and Japanese home cartridge release only, Metal Slug 3 is here, and it is a welcome surprise. 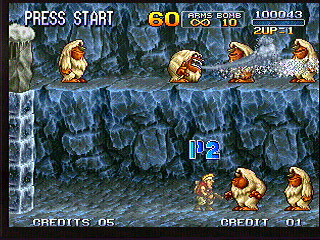 Everything you know and love about the metal slug series is here, and then some. 2D, contra style, run and gun slingin'? Yep. Power ups a' plenty? Oh yes. Multiple new steeds to mount and vehicles to commander? Certainly. Detailed graphics and huge, jaw dropping bosses? You got it. New additions never before seen in metal slug are branching paths for ultimate replayability, and vertical (R-Type perspective) and horizontal (Raiden style) sections of levels. With the vertical and horizontal shooting stages, this game borrows more than it's fair share from contra, which is a good thing.

Graphically, this game is amazing. All the detail you'd expect from a metal slug, with a few extras thrown in. Of particular note is the 2nd stage, the zombie stage. The animation when you turn into a zombie and when you die as a zombie is unbelieveably detailed and grotesque. Another section of the game that is graphically superior is when you find your elephant steed. During a frozen section of the game, you have to opportunity to climb aboard a huge elephant. The animation of the elephant walking is so realistic, you swear it for a real elephant. I could go on and on, but trust me- graphic detail is taken to new levels with metal slug 3.

Another place this game really shines is in the gameplay. With so many vehicles and weapons to use, along with different level maps and enemies depending on where you go and what you do, you will never tire of this game. The challenge is also part of the appeal that keeps you coming back for more. Like the other metal slugs, the first two levels are very easy and wet you appetite for what's to come. Once you get to the last two levels, get ready, because the action really heats up. Missiles and enemies come from all directions, and you really have to pay attention unless you want to use up a lot of continues. The only gripe I have here is that the pace of the last levels, and the game overall is a little more relaxed than it was in Metal Slug 1 and X. While not as frantic, you are still kept on your toes.

Sound is another high point to this game. Much of the music really gets you into the game, and is heavier than usual. Of particular note is the zombie stage, which is very moody and atmospheric, like a horror movie, or how about the last level in space, which sounds like a spacey mock parody of the star trek theme. Hi-Fi sound systems accommodate the sound the best; arcade speakers wouldn't do the game's sound and music justice.

Overall, Metal Slug 3 is a game worthy of the name and series it's based on. Awesome graphical detail makes the game look great. Branching levels, more weapons, vehicles and steeds ensure solid replayablity for a long periods of time. Unlike Metal Slug 1-X, you won't likely put this one away right away. The sounds and music of the game are so well done they are worth listening to out of your stereo or home theater. The only shortfall of this game lies in its lack of twitchyness compared to the last few Metal Slugs. This is only a minor mishap and doesn't detract from an other wise spectacular game. Long live SNK!