As a video game, bowling is one of the forgotten sports. Sure, there have been a few decent takes on the sport (Capcom bowling comes to mind), both in the home and the arcades, but none that have stood out as fun and memorable. League Bowling for the Neo Geo, however, shatters this misconception and makes bowling fun. 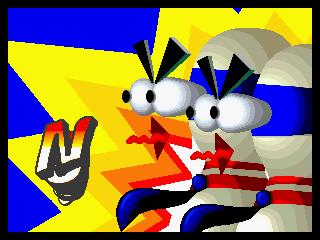 Graphics on this game are typical early-era Neo Geo. Vibrant colors are littered throughout the game on the bowler’s costume, the bowling balls, and the message screens above the pins. The different animation you see when getting a 7-10 split, a regular split, and a strike are very entertaining, and motivate you to continue a series of splits and strikes. The in-game graphics only take up half the screen in one player mode, with a behind-the-view scene of your bowler and the lane at the bottom. A visual status screen (usually showing your bowler’s reaction to the ball as it flies out of his hand or victory animation) is shown at the top quarter of the screen. The other half of the screen has a cute girl showing you the controls in one player or the other player in 2-4-player mode.

Again, League Bowling has nothing spectacular to be found here. The sound of the ball slamming into the pins sounds as real as it is gets, and the music playing before and after the game starts is humable, but nothing that really stands out in your mind after you play.

The less-is-more minimalism of League Bowling is what really sets it apart from all other bowling video games. The simple control scheme using only the “A” button and right and left on the stick makes this a pick up and play game, even for people who don’t normally play videogames. The stick moves your bowler left and right, and the first press of the “A” button sets the English (spin) on the ball, with a second press of the “A” button setting the power. This arcade-style control of the game makes it a great deal of fun.

Replay on League Bowling is ensured though its different scoring methods and 4-player support. League Bowling has three different modes of play: regulation, Strike 90, and Flash. Regulation is standard scoring and rules of bowling. Pretty good if you want to play just a straight game. Strike 90 is pretty boring, changing the scoring of strikes and splits to 90 and 60, respectively. Flash is the most interesting. In flash, there are various points, displayed in a 5X2 grid above the pins. The top 5 point values range between 100-300 points. The 5 values below range between 50-150. Every second, a bar highlights a value on top and on bottom. If you get a strike, you get the score of the number on top and if you get a spare, your score is the displayed number on the bottom. This adds a little strategy to the game, and keeps you coming back for more, especially in multi-player mode. Multiple players also give this game some replay. Playing one player is fun for a game or two, but in the end, you are only competing against your own high score. If you bring in 2-3 friends, competition can heat up and you will find yourself playing many more matches to see who’s the best bowler. This game also supports the link cable for multiplayer. Unfortunately, I’ve never had the chance to use this, as you need two Neo Geo systems, two games, and two TVs. It sure sounds like something that would add to the fun of a 4-player game, though.

Overall, League Bowling is a good party game on the Neo Geo. While the graphics and sounds are something that could easily have been done on a Super NES, it doesn’t really matter, since playability is what makes this game stand out. It isn’t a game you could find yourself playing for hours at a time, but if you have a party of non-gamers or relatives over, everyone would enjoy a game or two, if not more.