In the mid-nineties, 2D fighting games were slowly losing their popularity. 3D was starting to catch on, and it looked like 2D was on its way out. Companies that created 2D fighters needed a gimmick to keep gamers popping in their quarters. This is when SNK and Capcom thought up something new. Why not turn to professional wrestling, and make a tag-team fighting game? This inspiration lead to SNK’s 1996 game, Kizuna Encounter. 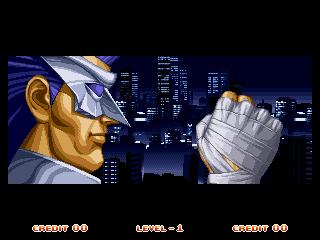 Graphics in Kizuna Encounter remind one quite a bit of old-school Neo Geo games. Dark, Intense colors, and large character sprites highlight the tag-team action. Many background environments are gritty, from the slums to the top of a construction site. The whole visual experience of this game takes me back to the early days of Art of Fighting for some reason or another. The odd mix of dark backgrounds and colorful character sprites vividly take the player back to the early days of the Neo Geo, and that is a good thing. The character sprites themselves hearken back to earlier days as well, with zooming features made famous in Samurai Shodown. When the two fighters are close, they appear very large and detailed. When the two fighters are apart, the screen zooms out, allowing the player to view the entire background and smaller likenesses of the fighters. Another point to note in the graphics are the intros before a fight begins. Pre-dating Last Blade, Mark of the Wolves, and Capcom Vs SNK, many stages show a widescreen of the background where the fight will begin, with sunlight shining, crows flying toward you, and elevator moving to the top of the construction site, among others. A nice touch that heightens the drama and mood of the game.

Just like the graphics, the sound on this game takes me back to old-school Neo Geo games such as Art of Fighting. The music, while forgettable, has the same quality of older Neo Geo games. This gives Kizuna Encounter a good retro feel and makes it even more fun to play. Sound effects are pretty average in this game, with every attack making the trademark thud noise you hear in many fighters. One standout in the sound department that connects it to the graphics is the announcer’s phrase, “Beat Up.” Instead of saying the usual “fight” at the beginning of the match, it reminds the player they are fighting on some rough back alleys, not just the usual inappropriate backdrops of most fighters. The “Beat Up” announcement combined with the gritty backdrops give Kizuna Encounter a real sense of atmosphere. Too bad the rest of the sounds aren’t as good.

Controls are pretty basic and get the action moving pretty well in Kizuna Encounter. “A” button is punch; “B” button performs kicks, the “C” button launches a weapon attack, and the “D” button tags. If you pull the stick toward your opponent and press any attack button, you perform a stronger attack. Defense maneuvers are done by pressing “A” and “B” to dodge (like sidestepping in KoF’s Extra mode), and a sway behind the opponent similar to Samurai Shodown IV is executed by pressing toward your opponent + “A” and “B”. This move is especially useful if you’re being pinned in a corner and need to get to your teammate to tag out when your energy is low. Overall, the game controls pretty well. Moves and combos are easy to execute.

The gameplay of Kizuna Encounter really shines. While there are only 10 characters (11 if you count the Boss), the number of teams of two that can be created adds to the replay of the game. Gameplay is similar to the Capcom Vs. series, where one team member sits out while the other recovers their energy. One major gripe I do have with the game is that once a teammate has lost all of his/her energy, the match is over. This makes for some very short games. It would have been nice if the game continued on with the other character when one gets knocked out, but this isn’t the case. This is probably due to the fact that this is an arcade game. The longer people are playing, the less money is made on the machine. Another feature, which I have yet to try, is the 2-player option. When I checked the settings with my modded Neo, I noticed the Japanese version is cooperative, with each player taking a team member. When the game is played in English, the game is competitive, with player’s team against another. If it’s true that the Japanese version is cooperative, this is a very good feature that would add some variety and originality to the game.

Gameplay seems to focus on old school fighting rather than combos and flashy Supers. While both of these elements are present, they are nowhere near as over the top as Capcom’s Vs games. This, together with the graphics and sound, add to the game’s old-school charm. Also in keeping with SNK’s old-school tradition, the last boss is unrealistically cheap and hard to beat. I would even go so far to say that he is the hardest boss in a fighting game I have ever faced. I could barely get 2 hits on him before the match was over and my character was lying on the ground!

Kizuna Encounter is an above average effort on the Neo Geo. The graphics, sound, and gameplay all add up to an experience that takes you back to the old-school days of Neo gaming. It’s a highly collectable game for the Home system, ranging from $600-800, but if you have a cabinet or a phantom-1, definitely check this game out, as it goes for as low as $40-80 on MVS. Otherwise, check it out on MAME or NeoRageX. You will be glad you did.