There are three kinds of puzzle games: Good, bad, and weird. Gururin is a subtle mix of the last two. It's 40 of the strangest MVS megs you'll ever play.

This is going to sound bizarre, so strap in. Gururin offers a square pit in the middle of the screen, into which tiny, vaguely medieval, vaguely Playmobil people promptly plummet. Your goal is to make three people of the same color line up and disappear--but to do that, you won't flip the people around as they fall but rather rotate the entire pit once they've landed. Like clothes in a dryer, you've got to flip the whole playfield around and try to match up the midgets as they slide down to the bottom of the screen, reorganizing themselves as they go. As the game gets harder, some of the tiny people grab hands and won't be separated, leaving you with nasty holes and difficult breaks in the puzzle. Two players can go head to head, or one player can go against computer opponents, the first handful of which include a crying insect boy, a butcher pig, a bad-ass biker fox, an academic turtle, and a drunk squirrel. Yes, really. 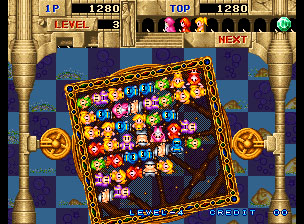 The buttons are simple enough--A and B rotate the pit 90-degrees either left or right, and holding a button will rotate it 180-degrees. You can control the falling people with the joystick and attempt to place them to set up chains. But often, by the time the game gives you a cue to rotate the pit (which is absolutely necessary, as you simply cannot think as far ahead and juggle as many possibility variables as the game expects), new people have begun to fall, and that prevents pit rotation until they've dropped. If you miss a rotation cue and those new people block your old combo, well, tough. As a result, the best strategy seems to be to just constantly rotate the puzzle, forethought be damned. To puzzle fans, "just push the button without taking time to think" is not only insulting but downright revolting. The gameplay just doesn't hold up. 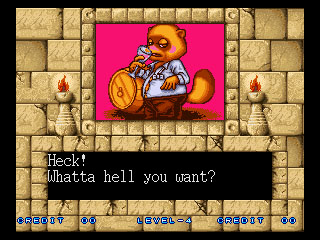 Bright, squat, and at times, psychedelic. The backgrounds of the levels are Escher-style animations of strange morphing objects--fish, lips, cat people, and heaven knows what else. You probably won't notice them during play because you'll be frantically trying to line up the ladies in the pink dresses but not the ninja in the blue outfits--but if the patterns in the background do catch your eye, they'll throw you off. The game does little to exploit the Neo hardware. 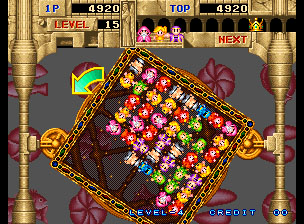 If Danny Elfman interpreted Bach armed only with a Casio drum machine, a calliope, and a Game Boy, this is what it might sound like...only worse. The pseudo-classical/ psycho-circus minor-key melodies change throughout, but some of them seem to have been composed utterly randomly, and they don't get better as they go. Nor do they get far with bland arrangements--the main instrument, it seems, is "bloop." When one player creates a match, a big skull brick appears in their opponent's pit, accompanied by a truly creepy demonic laugh. It's all very unsettling. 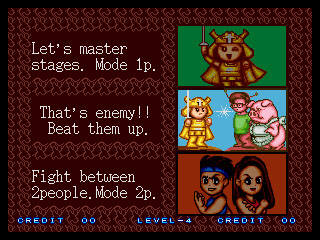 Honestly, there's not much replay value, unless (like me) you believe that there's more here than the game is letting on. I can't help but think there will be some major mental payoff for learning to play Gururin well--why else would the game be this insanely difficult? It's very, very hard to plan as far in advance as the game needs you to plan; the mental disciplines are much more demanding than other puzzlers. And honestly, it's not challenging in a good way, but in a frustrating way. 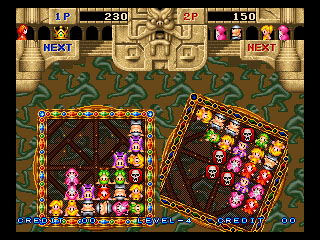 You know that screen that says "Winners Don't Do Drugs" that shows up when you start many Neo games? I have a strong suspicion that the designers of Gururin are not winners. It's little wonder that this oddball never made it beyond its MVS version. There are several better puzzle games available for the Neo, all of which should be investigated first. Gururin's rarity makes it hard to find and a bit pricey--it'll probably run you more than Bust-A-Move or Magical Drop III--so unless you're an absolute puzzle completist looking for the hardest and least rewarding game made for the Neo-Geo, you can let it slide.