ysselcneogeo said:
Meh. Are people still excited about shit emulator collections? Like how many times can you rebundle the same shit with little to no effort. Give me real ports with native 16:9, training modes arranged ost etc. Shit like this is just pathetic milking
Click to expand...

Not really shocking given the level of bitch around here, but I find it amusing that you're the only person asking real questions.

This is some of the most lazy, low effort shit in gaming. These crappy emulator repackages should be like $5 max.

You could do a lot of really interesting stuff with a proper remaster of the Samurai Shodown games like make the games render at double resolution so that even when you're zoomed out the sprites still look just as detailed as they do when you're zoomed in, etc. That would actually require effort and cost money, though, and they know that stupid fanboys will pay for literally anything with the name SNK on the box, so they squat out these turds. 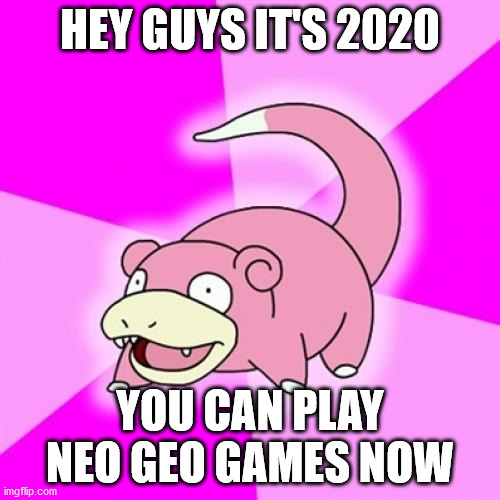 Evil Wasabi said:
This comment is such bullshit. The maps were small, the encounter rates were ridiculously high, and the run thru playtime was less than a day, and would have been 6 hours with a normal encounter rate and battle system that wasn't so dependent on special moves slowing down the interface.
Click to expand...

Wow, it was that short all along?

As was pointed out, how can you genuinely evaluate it story-wise against the Squaresoft RPGs you mentioned without an English localization ?? The story is the most important thing with a RPG, isn't it ?? I know it is for me!

And if what Wasabi said is true, I shouldn't have wasted any of my time with it, guess I was being superficial and admiring the sprites, and part leftover residue from being a fan of the arcade game BITD.
J

Anyone hear of SSV Perfect before?

Wtf is this shit? I’m intrigued

My guess is SSV Perfect is the finished version of SSVS Final Edition that got touted and location tested, but never released.
N

Mentioned in the trailer, it's the "Final NEOGEO Masterpiece" or something

Does anyone know how these "collection" games are stored on disc? Has anyone been able to pull the rom from them? SSV-Perfect would be a nice one to grab.

They should release Perfect on AES/MVS too. I’m thirsty enough to buy it

heihachi said:
They should release Perfect on AES/MVS too. I’m thirsty enough to buy it
Click to expand... Evan said:
Someone will eventually rip the rom and put it on a cart
Click to expand...

That’s cool, and I’d definitely put that rom on a flash cart...but an official SNK release would be neat as long as it’s not garbage like most of the recent official SNK stuff

Awesome, this is completely unexpected. Really interested to check this out

It has the same kanji "完全版" (kanzenban) as that SSZS location test nearly 15 years ago. Hopefully this is the refined/finished version of that ROM. Would be neat to see this running on original hardware at some point too. Hopefully, this opens the gates for more completed unreleased NG games.

I somehow knew they would get me to buy this... I feel like a hypocrite. Whatcha gonna do *shrug*

Necrosofty, who works with SNK on translations and did so for Perfect, shared the backstory of the game on his Twitter. See below.

♥it has finally been announced! Samurai Shodown V Perfect, a game that has gone unreleased for 15 years, is included in the upcoming Samurai Shodown collection from @SNKPofficial. In this thread I'll share with you how this game got saved after so long!

First, what is SSV Perfect? It's largely a rebalance of V Special, fixing issues that caused problems in tournaments, a new title screen, and other minor tweaks. The BIG change is new story for every character, a couple new mid-game scenes, and a joke that took 15 years to tell.

This game was made not too long after V Special, with a skeleton crew, but with the involvement of SSV director Takaya. Perfect was done on request from Yuki Enterprise, who was managing development, while the team was already working on SSVI. But nobody told SNK about it.

The newly formed Playmore (aka SNK) hadn't been told this game was being made. In fact, they found out when the game was in location test in one single location. SNK found out and got the game pulled from play within a couple hours!

This location test is the source of the infamous "red logo version" you see in a couple blurry photos on the net. The game was pulled from location test so fast that the director Takaya didn't even have time to get to the site to watch people play before it was pulled.

Fast forward to early 2019 & I'm interviewing Takaya for the collection alongside @adamA_0330 from SNK. We ask... do you remember this version? He says yes, and tells us the story. We ask... any chance you still have the code He looks at SNK... you're not supposed to keep stuff.

Adam says, "please, if you have anything, we want to publish it." He says he'll look. I pester him for days (lol) and eventually he comes back saying there's no code, but he has a ROM. He can confirm it's the finished version. By the way, this game was FINISHED, just unreleased.

We get the rom. We check it out. It runs. It's got the new story. It's got the new title screen, changed to Mizuki's background because Takaya likes that character a lot. It was the legendary lost game, complete and ready to go.

But that's not all! Though there was a lot of fighting to get it there, and I had a 48 hour window in which to do it, we managed to translate the story into English. The rom was Japanese only, but since the data was largely the same as Special, we were able to reuse the fonts.

So not only do you get the story, you get it in English. Apologies if it's not the most elegant translation, but again, I had 48 hours! Regardless, thanks to the efforts of the team, it's running perfectly, and it's playable online, something that never would've happened in 2005!

It's amazing to be able to find the game, preserve it, translate it, and present it to everyone intact, as intended. This is the final true Neo Geo release, in 2020 - there was an MVS cart made and everything, now lost. Thanks to Takaya, Other Ocean, and SNK for making it happen.

Sadly, the designer who wrote all the new story, after working on SSV, V Special, V Perfect, and IV, passed away in the intervening years, and never got to see V Perfect get released. His name is Touru Sakurai, and the release of this game is dedicated to his honor.

(to everyone asking about rebalances, what Takaya could remember was changed was very small, and more akin to bug fixes, so don't get too excited about that element. sorry to confuse folks!)

Oh crap, I forgot to tell you the 15 year joke! The joke was, in the new story, it's strongly hinted that Hazuki Kazama, sister to Kazuki and Sogetsu, would debut in the next game. They wrote this because fans kept asking for her to be in there, she was a real favorite.

So they put this hint, "a brother, next time I'll join you" kind of thing, to rile the fans up. Meanwhile they were already finishing VI knowing full well she was not going to be in it. So it was a big bait and switch they were going to pull, but the reveal is 15 years too late!
Click to expand...

Brandon/Necrosofty can translate ? Huh, don't remember him ever mentioning that, didn't know. I knew him way back from his InsertCredit days.

NightWolve said:
Brandon/Necrosofty can translate ? Huh, don't remember him ever mentioning that, didn't know. I knew him way back from his InsertCredit days.
Click to expand...

Get him to do the work for us and get the rom data released.

Well, what I did is signed up at https://www.epicgames.com/store/en-US/ and set a June 11th reminder on my phone for the 1st week free release. I didn't see any other means to create a reminder/wishlist or something on the site.

New Samurai Shodown collection will launch first for free on the Epic Games Store
Other platforms later for $39.99
Click to expand...

First thing I thought when I saw this - for once I’m glad these collections are usually emulator and ROM gateways, so extracting the rom and putting it on, say a NeoSD, for instance, should be doable.

O look a collection release with an unreleased game (that never cut it because nobody cared anymore at that point and because it probably sucked ass).
Curb your enthousiasm is what I'm saying.

KRONOS said:
It has the same kanji "完全版" (kanzenban) as that SSZS location test nearly 15 years ago. Hopefully this is the refined/finished version of that ROM. Would be neat to see this running on original hardware at some point too. Hopefully, this opens the gates for more completed unreleased NG games.
Click to expand...