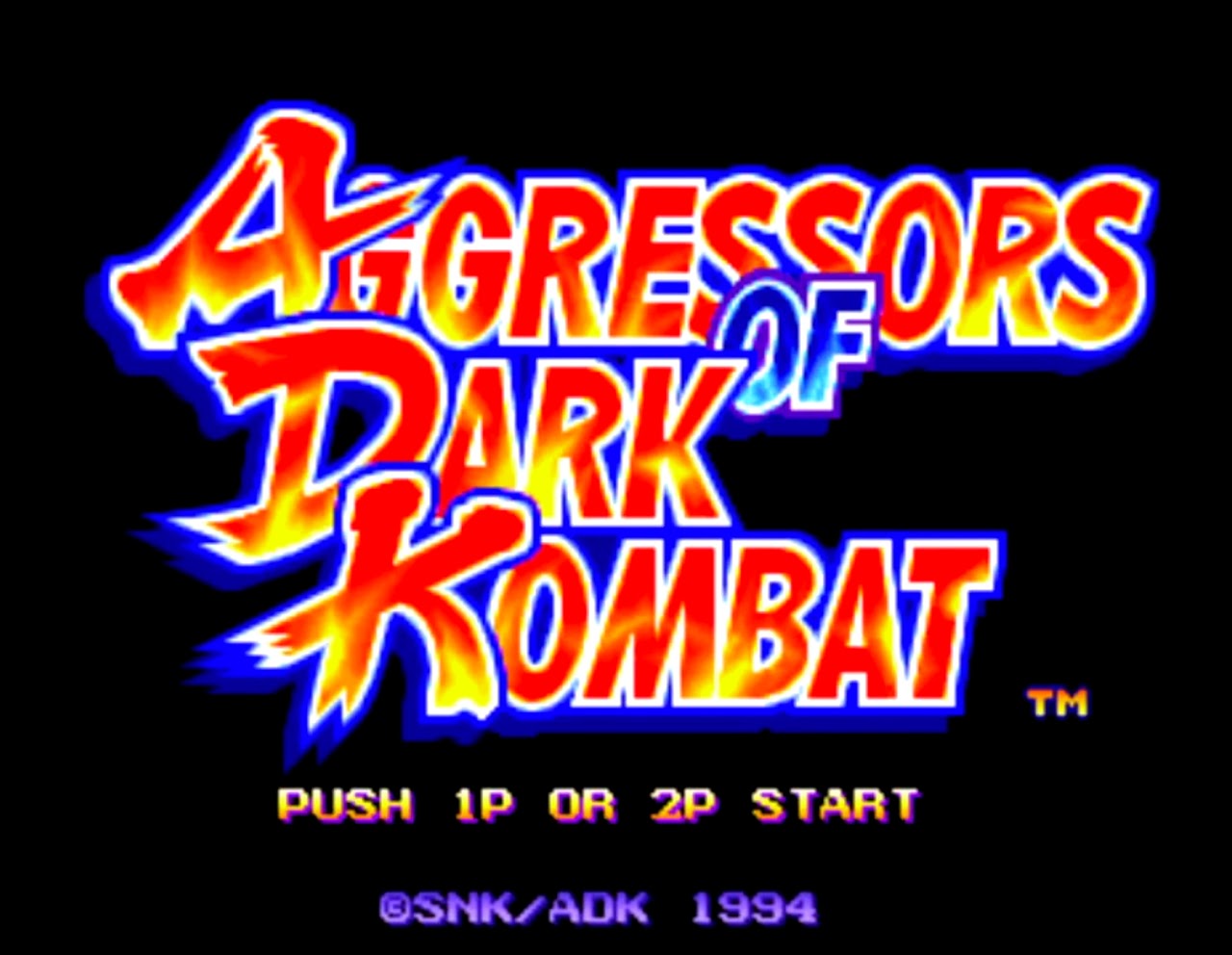 ADK's weird fighting game/beat-em-up hybrid is an unpolished attempt at marrying the two melee arcade game genres. While GanGan gets points for being unique, that's about all it has going for it.​

Due to the abbreviation for the western version of the game being the same as the name of the developer, I'll be referring to it as its Japanese name, GanGan, throughout the review.

Developed by ADK (of World Heroes fame), GanGan was a unique attempt at creating something a little different in the crowded mid-90's fighting game scene. While the game is certainly unique, it did little to capture the interest of gamers with its odd premise and stiff controls. Despite some popularity in Japanese arcades upon release, GanGan never received a home port to any 16 or 32-bit console of the day. I personally missed out on this game in the 90's as no arcades in the area had it installed in their MVS cabinets, and given the high price of AES releases I focused on getting the more solid/popular fighting games when I could afford new titles. The first time I ever played this game was three weeks ago (at the time of writing) when I sourced a cheap copy from Japan for my archive. So, you're not getting any nostalgia here - this review is 100% from a modern perspective.

GanGan is an odd one: it's not quite a fighting game, and not quite a beat-em-up. Rather, ADK focused on creating a hybrid battle system that pulled elements from each genre to create something new. Like a beat-em-up, players have two main action buttons for punch and kick, and a third button for jump. As you clash fists with your opponent, you can do quick auto-combos by pressing a button over and over, but the crux of the game plan is in GanGan's grapple system. While it's not as deep as a traditional wrestling game, it works well enough. When you grab an opponent they will have a split second to react and break your grip. If an exclamation icon flashes above their head, they've lost the opportunity to reverse your move and you can follow through with your throw.

Each of the eight characters also has a few special moves you can perform that take cues from more traditional fighting games. Characters also have a GanGan (CRAZY!) meter that fills as you attack and are attacked. Once the meter is full you have access to your GanGan attack. Think of this as a complicated to pull of super move. If it connects, though, it instantly KO's your opponent. Given the game's beat-em-up roots, weapons and items scattered around the stage can be picked up as used against your opponent as well. 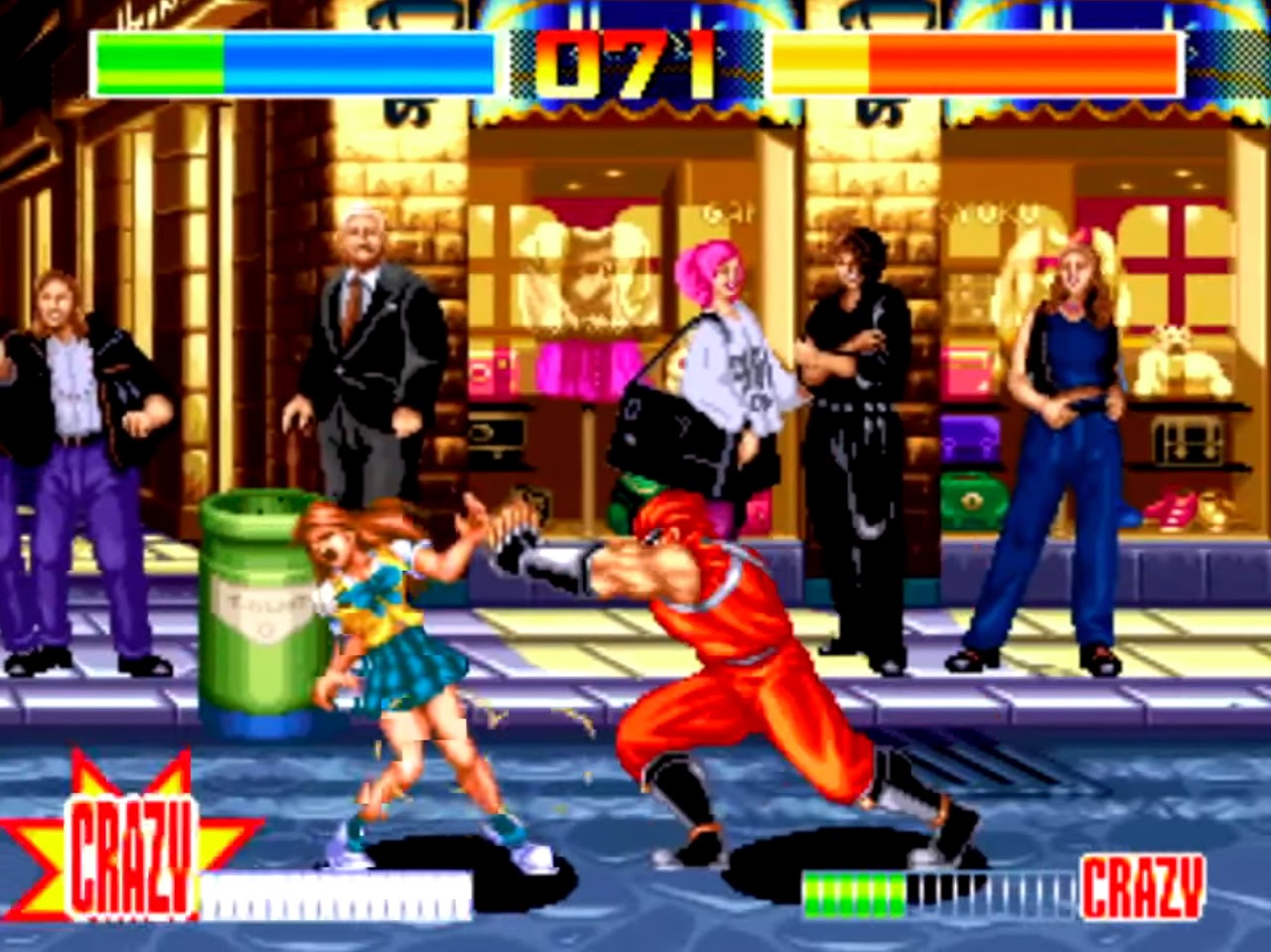 Players also have a full range of motion to move around the arena like a beat-em-up or wrestling game. The pace of movement is pretty slow, although you do walk faster moving diagonally or vertically than horizontally - which is a little strange. Also, if your opponent is above or below you and you try to move vertically to line up with them, you are blocked by the other character's hit box. In theory this makes sense, as you can't walk through people in real life. In a game that moves this slowly, though, this is more of a cause of frustration as you need to be close to your opponent to attack, but you can't attack unless you're head on. Tactics you use in brawlers, like circling around the enemy and coming in from a diagonal to get the best position, just don't work here. Thankfully each bout lasts only one round, but that round is usually pretty long given the overall slow pace of the game's mechanics.
GanGan isn't an ugly game, but it isn't the sharpest either. Given the meg count, you'd think that with only eight characters there would be more animation. As it stands, the bland character designs look like they could have come straight out of a Kunio-kun game from Technos with Fuma from World Heroes thrown in for fun (I guess?). Backgrounds are colorful and detailed, but the detail on display is uninteresting. Aurally, the game doesn't fair much better with bland music and sound effects.

At the end of the day, the hybrid nature of GanGan gets in its own way rather than providing the player a unique brawler experience. It tries to be too many things to too many people for any one mechanic to be truly enjoyable. It reminds me of modern AAA console games that try to shoe horn in as many features as possible to reach the broadest audience. Unfortunately for GanGan this approach lead to a mess of a game that is not very enjoyable solo and only marginally enjoyable with a friend. GanGan is a curio title, nothing more and nothing less. If you have no nostalgia with this game, you'll quickly put it down in favor of the dozens of other better games on the Neo-Geo.

If you want this game in your AES archive, you can snag a complete Japanese copy for as little as $150 or as much as $300 depending on where you purchase it. The US edition is around $300-$400. The game is ludicrously cheap on Neo CD and MVS, so I recommend exploring those routes if you want to play it on real hardware. You can also grab it on the Arcade Archives series for $8. Even at that low price, I recommend spending your money elsewhere unless you have a thing for ADK developed games.

I don't recommend picking up this game if you're trying to establish a library of Neo-Geo titles until you've secured other, better games first. This should be one of the last games you pick up.