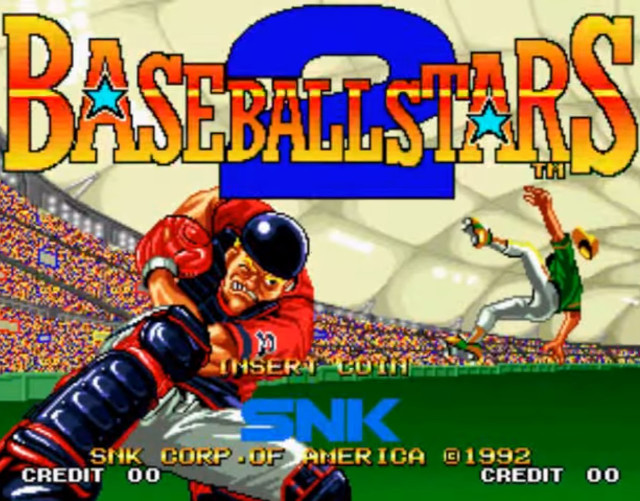 Coming hot off the heels of the successful launch title Baseball Stars Professional, SNK hit it out of the ballpark with the second game in the series on the Neo-Geo. Fun, colorful, and well animated sprites adorn the screen, and players can jump right into the action without a lot of team or item management. Even if you're not a sports or baseball fan, there is a lot to love here.​

The Baseball Stars series actually got its start outside of the arcade and at home on the NES. Praised for its deep team customization options outside of the action, the NES Baseball Stars is lauded as one of the best if not the best baseball game on Nintendo's 8-bit hardware. When ready to release its Neo-Geo to the world in 1990, SNK decided to bring the Baseball Stars experience to the arcade in the form of Baseball Stars Professional. While the team management and other time-consuming mechanics were watered down for the arcade release, the more action oriented game plays great and garnered good sales and critical reception upon release. Riding on the success of BB Stars Professional, SNK released Baseball Stars 2 in mid 1992 to rave reviews and good sales. While not much bigger in cartridge size than the first Neo-Geo outing, Baseball Stars 2 ups the ante with better graphics, sound, and play-ability.

Disclaimer: I'm not a sports fan or a baseball fan. So, while I know the basic mechanics of of baseball, this review is coming from somebody who does not have much experience with baseball or other sports simulation games.

Baseball Stars 2 has a little more meat on its bones than its predecessor, but being an arcade game the customization and team management options still leave much to be desired. As an arcade game, though, one should expect to be able to jump into something exciting and begin playing immediately rather than managing various stats in drab menus. Upon pressing start, players can choose from a variety of fictional teams that hail from various countries around the world. Each team has various batting, pitching, and outfield stats to pay attention to that affect the moment to moment gameplay. At the end of the day, though, BB Stars 2 is an arcade baseball game, so the nuance in these stats will feel like fluff to all but the most ardent arcade sports fan that is willing to put dozens of hours into the game to understand the nuances of the frame timing and other under-the-hood mechanics that make the game work.

The general gameplay feel is good and is a bit tighter than its predecessor. The different ways you can control a ball upon pitch, and the movement and speed of your team in the outfield doesn't feel unfair - just make sure NOT to press the control stick until you see the outfield character come on screen, lest you go running in an opposite direction from the ball you're trying to catch. 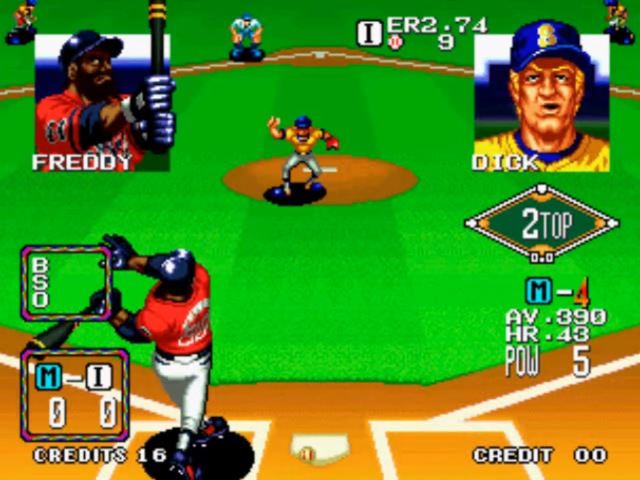 My general beef is with the batting mechanics. While I've seen plenty of YouTube videos and have played with people in the past that had the patience to understand the timing, I can never seem to fully hit the ball and always end up with foul. I can't knock the game as I know it can be played well, but for people not accustom to baseball games, this all-important mechanic is the crux of the gameplay experience and the consistent precision you need to pull off even a normal hit will turn off a lot of new players.

Baseball Stars 2, like any good arcade sports titles, needed to have big, colorful graphics to grab people's attention and entice them to put money into the machine. The big, attractive title screen, detailed sprite work, and bright colors across the game really help to sell the experience and captures the "big-top" feel of a real baseball game. The player sprites are large and detailed, but given the limited amount of memory on the rom compared to later Neo-Geo releases there are only about 3 or 4 player sprites the game recycles per team with the only defining feature being the pallet swaps for team colors and skin tone. It doesn't kill the experience, but it does get a little repetitive after a while.

Like most Neo-Geo games, sound is a strong suit with plenty of chatter from the announcer and great sound effects. The crack of the bat, crowd noise, and other effects really make the game pop and keep you interested. Music, as you would imagine, is at a minimum, but it is serviceable for what it's worth. My only gripe with the sound design is the over-used "Ba-ba-baseball Stars 2!" that plays over and over again in the background during a game.

Baseball Stars 2 is a great arcade sports title that you can pick up and play easily with little knowledge of the actual sport. While it will take inexperienced players a while to get used to the batting mechanics, what's here is otherwise a fun pick-up for single or competitive play. If you're hoping for the AES release, be prepared to pay as it continues to rise in value in the modern market. A complete Japanese copy can be had for as little as $200 in some private sales, but be prepared to pay $275 or more in the broad market. The US copy (which is a sought after "dog-tag" release) can be had for around $300 or so. The game isn't the cheapest on MVS, but is still much less than the AES version. You can pick up the Neo CD version as well for around the same price as the MVS version. There are better, more important games to get for your AES at this price point, but this is still a solid purchase - especially if you like Baseball games. Thankfully, Baseball Stars 2 can be found on many digital storefronts for as little as $8 for the more casual Neo fan that want's a quick arcade sports experience and doesn't want to shell out the $$$ for a Neo-Geo original.