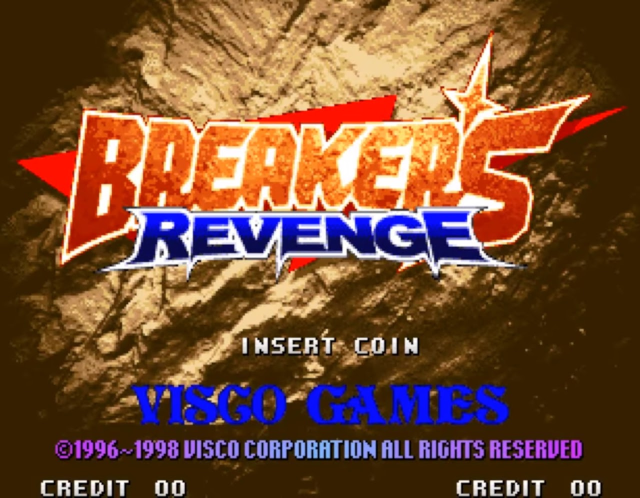 Breakers Revenge is an underrated gem in the pantheon of Neo-Geo fighting games. While it's not of the same calibur of King of Fighters 98 or Real Bout 2 which released the same year, Breakers Revenge is the perfect pallet cleanser after a night of gaming with friends when you're ready to wind down. Make no mistake, though, this approachable and well designed fighter is an incredible amount of fun for any fighting game fan.​

The original Breakers, released in 1996 and developed by Visco, flew under the radar in the crowded mid-90's fighting game onslaught. Releasing along side titles like King of Fighters 96, Samurai Shodown 4, Street Fighter Alpha 2, and X-Men Vs. Street Fighter, Breakers was bound to be lost to obscurity. Despite being released on the AES and Neo CD, Breakers never saw a port to any other console of the day, nor was it released outside of Japan. Even the MVS release was hard to find by the day's standards. Thankfully, Visco saw enough potential in their little fighting game that could to release a sequel two years later - but only in the arcade. When Breakers Revenge was announced in 1998 it was met with little fan fare as gamers and critics hardly remembered the original game, and nobody had asked for a sequel. Despite the odds, the Breakers series had a handful of dedicated fans, and even critics of the day that got their hands on the game quickly realized that underneath bland character designs there was a solid, technical fighter that was an absolute blast to play. It's a rare example of a 90's fighter that was truly approachable for just about anyone, but deeply satisfying for even the hardcore fighting game aficionado.

Breakers Revenge brings to the table 10 playable fighters all with unique sprites, animation, and move sets. While some characters look "generic" on the surface, once you dig into their move set you quickly realize that there is a lot of originality here. Visco went out of their way to ensure that some gameplay elements were familiar to fans of games like Street Fighter or Fatal Fury, but also ensured that for every similarity there was a bit of originality. The cast is a little bland, weird even, but each fighter is unique and a lot of fun overall. With such a small roster it's easy to jump in and find a character that clicks with you. As a fun little detail, Visco created different names for every character when you're fighting a mirror match against the computer.

The general gameplay takes cues from the Real Bout games and even Street Fighter Alpha. Players have four attack buttons set up in classic SNK style with A and B being your light punch and kick, and C and D being your hard punch and kick. The main gameplay hook is the chain combo system that works a lot like the aforementioned games. Light attacks can be chained into heavier attacks, but never back down the line. This keeps combos somewhat manageable, but long enough to be satisfying. On top of the chain system, certain characters also have the ability for special combos that can be launched with multiple presses of the same button. Sho, for example, has a special combo sequence done by pressing C three times in a row. The final hit of the combo is a special dragon punch style move that launches the opponent in the air to set up for an air combo. Sho does not have access to this dragon punch outside of this combo string, which can make for some crazy mix-ups if the opponent is not careful.

On top of the generous combo system, the mechanics of the game allow almost all moves to be canceled out of, and super attacks to be canceled out of special attacks. In Sho's example above, you can cancel out of his special launcher into one of his air supers for some significant damage. Speaking of damage, there's a lot of it! Despite having a damage scale for longer combos, the game's damage output is significantly higher than contemporaries of the day. To compliment the high damage and fast tempo of the gameplay, characters have a decent amount of movement options that were common place in fighters from this era. All characters have access to a short forward dash or backward dash, but you can jump cancel out of a dash to gain extra distance in your jumps due to the momentum of the dash being carried forward.

While most of the special move inputs are standard fare for 2D fighters, most characters have a bevy of command normals (hold a direction and press an attack button) or two button press moves that give more options to the player outside of their normals and special attacks. Using Sho as an example again, he can perform an overhead attack by pressing AC, a low shin-kick by pressing BD, and a low "tiger-knee" like move by pressing BC which can be used as a launcher mid combo! 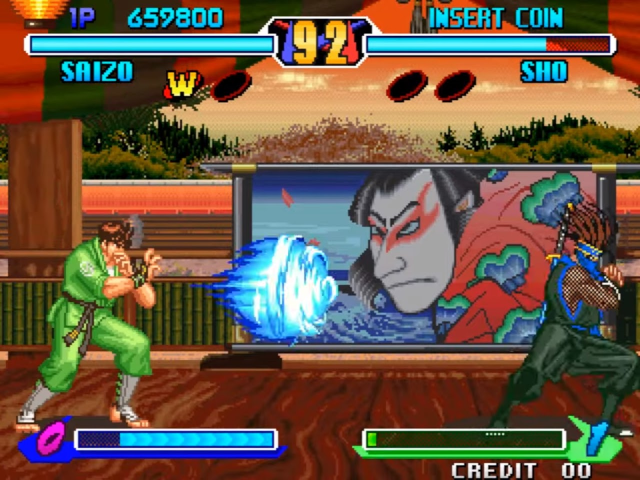 Super moves are gained by building bar in your super meter by using special attacks and also by being hit by opponent's attacks. Every character has access to three super bars, but if you choose not to use a super you will enter Maximum mode when all three bars are full. In Maximum mode all of your special attacks get a free damage buff.

Despite the bland character designs, the sprite work is absolutely beautiful. While most of the design resources were put into the large and detailed character sprites, the backgrounds are generally okay. They are not up to SNK standard, but they get the job done. Breakers Revenge is bright and colorful with awesome special effects - to say this game has a bombastic approach to presentation is an understatement. That said, the actual character portraits in the select screen and pre/post fight scenes leave a bit to be desired compared to the overall beauty of the character sprites themselves. Animation is also on point, with all characters being very well animated with strong key-frames that help the player to easily identify and telegraph every move.

Sound design is a bit of a mixed bag, but is sufficient overall. Impact sound effects are extremely satisfying and help to give even more feedback to the player during a match. Music is fine, but the tracks are super short at less than a minute each before they loop. Considering matches are over so quickly, you don't have much time to pay attention to the music. Additionally, when a match is over there is a victory fan fare that plays which cuts out the music track. Voices are mostly decent, with only a few characters that sound a little weird. Pelle, for example, sounds like a muffled 90's gay stereotype with odd grunts, groans, and noises that are somewhat distracting during a fight.

Breakers Revenge is a weird fighting game with oddball characters that plays really, really well. The player feedback is top-notch, the hit detection is as good as what was coming out of SNK and Capcom at the time, and the flexible combo system provides a landscape for the combo-architect to create some truly awesome strings. Unlike a game like Fighters History Dynamite, Breakers Revenge is legitimately good! Sure, it doesn't have the clout of other more popular fighters on the Neo-Geo, but the mechanics and amazing game feel make this one of the most underrated, hidden gems on the hardware.

Sadly, Breakers Revenge never saw a release outside of the arcade, so if you're looking for an original cartridge you have two options: get the MVS cart or a conversion for your AES. Either way, you'll be paying more for this game than other MVS games due to it being a little more scarce than more popular titles. Visco licensed the game to a Japanese company by the name of Columbus Circle in 2015 to release the game in AES format almost 20 years after its release. Despite being an official release, this expensive collectors item is essentially a reproduction of the game. Oddly enough, you can get cheaper and even higher quality reproductions of this game for far, far less than the price of this "licensed" version. The game is also quite popular on the GGPO driven Fightcade online game client, with a healthy and active community of fans that play this game religiously. You will also be able to get the Breakers Combo Pack which is to be launched on PC and modern game consoles before the end of 2020 - but the netcode and extras includes have yet to be detailed, so I'll update this review with more details on that version of the game once it is released.

Overall, just play this game anyway you can. It's a whole load of fun and it is honestly better than it has any right to be.

Visit www.bokujinsroom.net to find more reviews by Yagamikun for the CPS2, PGM, and more!
Reactions: FlyingPowerDisc and max 330 mega