The Neo-Geo (ネオジオ) (officially printed as NEO•GEO) is a cartridge-based arcade and home video game system released on July 1, 1991 by Japanese game company SNK. Being in the Fourth generation of Gaming, it was the first console in the former Neo Geo family, which only lived through the 1990s. The hardware featured comparatively colourful 2D graphics. It's arcade counterpart is the Neo Geo MVS Arcade System.

The Neo Geo system was marketed as a very costly home console, commonly referred to today as the AES (Advanced Entertainment System). The Neo Geo was marketed as 24-bit, though it was technically a parallel processing 16-bit system with an 8-bit Zilog Z80 as coprocessor. The coprocessor was used as a CPU, and for sound processing. The Super Nintendo and Sega Genesis also had similar co-processors, with neither Sega nor Nintendo claiming they were 24-bit. 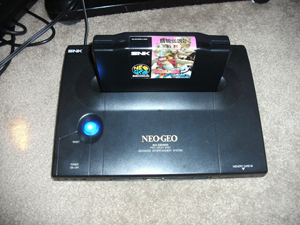 Initially, the (AES) home system was only available for rent to commercial establishments, such as hotel chains, bars and restaurants, and other venues. When customer response indicated that some gamers were willing to buy a $650 console, SNK expanded sales and marketing into the home console market. The Neo Geo console was officially launched on 31 January, 1990 in Osaka, Japan. Compared to the other 16-bit consoles of the time, Neo Geo's graphics and sound were vastly superior. The MVS was one of the most powerful arcade units at the time. Furthermore, since the AES was identical to its arcade counterpart, the MVS, arcade titles released for the home market were perfect translations. Although its high price tag kept it out of the mainstream gaming market, a strong game lineup likely contributed to the cult status of the Neo Geo, enabling it to outlast the more popular Sega Mega Drive/Genesis.

In the United States, the console was planned to debut at $599 USD and included two joystick controllers and a game, either Baseball Stars Professional or NAM-1975. However, the price was raised and its American launch debuted at $649.99. This package was known as the "Gold System." Later, the "Gold System" was bundled with Magician Lord and Fatal Fury. The system was also released in a "Silver System" package for $399.99, which included one joystick controller and did not include a game. Other games were priced at about $200 (and up). With these "premium" prices, though, most gamers weren't able to afford the system, so the console was only accessible to a niche market.

The home system featured two CPUs: the 16-bit Motorola 68000 main processor running at 12 MHz and the 8-bit Zilog Z80 coprocessor running at 4 MHz. A custom video chipset allowed the system to display 4,096 colors and 380 individual sprites onscreen simultaneously, while the onboard Yamaha YM2610 sound chip gave the system 15 channels of sound with seven channels reserved specifically for digital sound effects. When realtime 3D graphics stormed the arcade industry, the Neo Geo's hardware was unable to follow along. The longevity of Neo Geo games kept it alive in arcades, particularly in Japan, where the newest installment of its flagship franchise, The King of Fighters, caused a stir with every new release.

The last official game by SNK for the Neo Geo system, Samurai Shodown V Special, was released in 2004. SNK decided to abandon the video game hardware business due to the rampant piracy of game-cartridges, which SNK believed was partially responsible for its bankruptcy in 2001. SNK ceased to manufacture home consoles by the end of 1997, but continued to release games for both arcade and home for another 8 years.

Measured from the introduction of the arcade hardware in 1990 to the release of the last official home cartridge in 2004, the Neo Geo enjoyed a market lifespan of fourteen years, making it the second longest-lived arcade or home console system ever produced (after Atari 2600). On August 31, 2007, SNK stopped offering maintenance and repairs to Neo Geo home consoles, handhelds, and games. However, they will continue to repair their MVS arcade hardware.

The arcade machines had a memory card system by which a player could save a game to return to at a later time and could also be used to continue play on the SNK home console of the same name.

The MVS and AES hardware could execute identical machine code. Owners could move Mask ROMs from one type to the other, and the game would still run. The program specifics for both MVS and AES game options were contained on every game ROM, whether the cartridge was intended for home or arcade use. However, the arcade and home cartridges do have a different pinout. They were designed this way to prevent arcade operators from buying the cheaper home carts and then using them in arcades. It has been found that in a few home version games, one could unlock the arcade version of the game by inputting a special code.

Specification for ROM size was up to 330 megabits, hence the system displaying "MAX 330 MEGA PRO-GEAR SPEC" upon startup. While no technical advances were required to achieve it, some games over 100 megabits, such as World Heroes 2, followed this screen by displaying an animation proclaiming "THE 100MEGA SHOCK!". The original ROM size spec was later enhanced on cartridges with bank switching memory technology, increasing the maximum cartridge size to 716 Mbit. These new cartridges also caused the system to display "GIGA POWER PRO-GEAR SPEC" upon startup, indicating this enhancement. 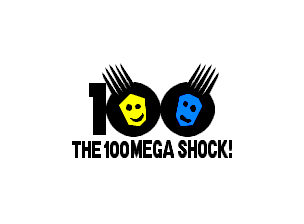 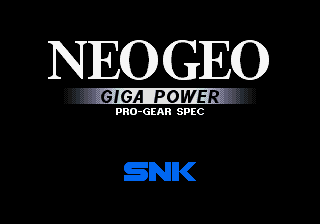 In recent years, advances in modern technology and the ever dropping price in ROM memory, unofficial Homebrew games like Fast Striker are well over 1Gbit in size.

Unlike most other video game consoles of its time, the Neo Geo did not use tilemap background layers. Instead, it relied exclusively on drawing sprites to create the background. Sprites are vertical strips which are 16 pixels wide, and can be 16 to 512 pixels tall. By laying multiple sprites side by side, the system can simulate a background layer. The system can draw up to 384 sprites on the screen at a time, and up to 96 per scanline. 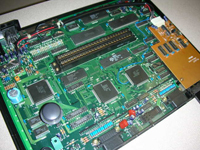 The mother board of the Neo Geo, with a daughterboard mounted in the lower right 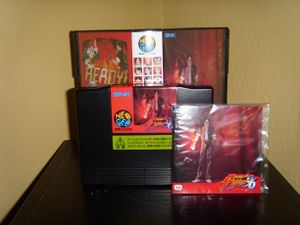 There is a thriving collector's scene for the Neo Geo home systems, especially the original AES home console. This is mainly because of the limited runs received by cartridges, the massive arcade library available, and the system's reputation as a 2D powerhouse. It is still common even to this day for both Neo Geo consoles and cartridges to fetch extremely high prices on eBay and other auction websites, particularly English versions of cartridges as these were produced in lower quantities. A handful of the rarest Neo Geo games can sell for well over $1,000 on eBay. This gives the system an almost cult following, as owners see the system as more of an "investment" rather than an ordinary videogame console. This leads to high resale value on most Neo Geo systems and games and makes the console a "must-have" for a number of video game collectors. The most expensive cartridge for the Neo Geo home system is the European-localized version of Kizuna Encounter: There are only five known copies of the game, with the most recently sold copy selling for about $12,000 USD.

Conversions are NGH/AES cartridges that have had their original Mask ROMs removed and replaced with those of an MVS cartridge, typically from an MVS game which had a very limited and rare home cart release, or none at all. In a few cases, conversions are made with EPROMs instead of Mask ROMs. Those are more correctly labeled as bootlegs. Discussion is often a very touchy subject and thus information is not widely known on their creation.

Generally, the value of a conversion is determined by the cost of parts (MVS cartridge, donor AES cart and label/insert) and not much more. Mask ROM conversions are usually worth only a fraction of an authentic NGH/AES copy. Ones made from EPROMs are worth considerably less. Conversions made from MVS exclusives are sometimes worth a bit more.

In recent years, NGH/AES conversions have become increasingly advanced and near-identical to their authentic counterparts. So much that in some cases, the only way to distinguish between a conversion and an authentic copy is to have both on hand to meticulously compare. As a result the NGH/AES collector's market has become increasingly dangerous. Potential buyers are always highly encouraged to research a particular copy's history and integrity before they buy.

On a related footnote, while often labeled as a stereotype, France has been accused and blamed for spearheading the advancement of conversions over the years. Some allegations against respected French collectors tend to be unfounded, while other cases have been proven with evidence.

A directly related subset of the home cartridges market, freaked cartridges are NGH/AES games that have been damaged in any number of ways by illegal distribution outfit Neo Geo Freak. The type of damage ranges from light cases of the occasional NGF sticker and re-printed case insert, to extreme examples of void stickers being plastered on the insert, cartridge and manual pages. The reasoning behind such damage isn't well known. 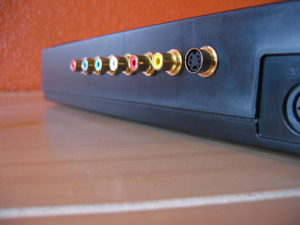 A popular facet of the Neo Geo that has grown over the years is the practice of modding NGH hardware. Virtually all of the mainstay mods enhance or replace certain original functions of the Neo Geo. Commonly installed mods include:

Most fan modding is done by individuals for their own personal use, though some people do it as a service. Popular service providers include:

Things You Never Knew About the Neo Geo