Wow, I am really impressed with that intro. As much as I've been with everything else I've seen about the game itself – it’s been said but again: this looks as good or even better than official releases. The programming and effort going into this, how spot on NeoGeo it looks, who couldn't be amazed.

I've been psyched about Knight's Change since the first time I read about it here and couldn't wait to put in a preorder. The idea, the theme and what I read about the gameplay/planned features still intrigue me.
However I was home sick for a couple of days and did some catching up on what has been going on here the last months in threads I don't usually follow. Now I have somewhat ambiguous feelings towards buying the MVS release: Even though I still totally dig and celebrate that there won't be any carts sacrificed and I understand how much more difficult it is to get your own boards engineered and made, it bums me out to suspect that they might have come into existence through some sort of cooperation with "David Garrett Enterprises" (which is no doubt run by one of the biggest scammers of the Neo scene, who has hurt the community to a tremendous extend).

Spoiler:
Jockey Grandprix AES Conversion "made by DG Enterprises Limited" and (shockingly) sold through the NeoStore: 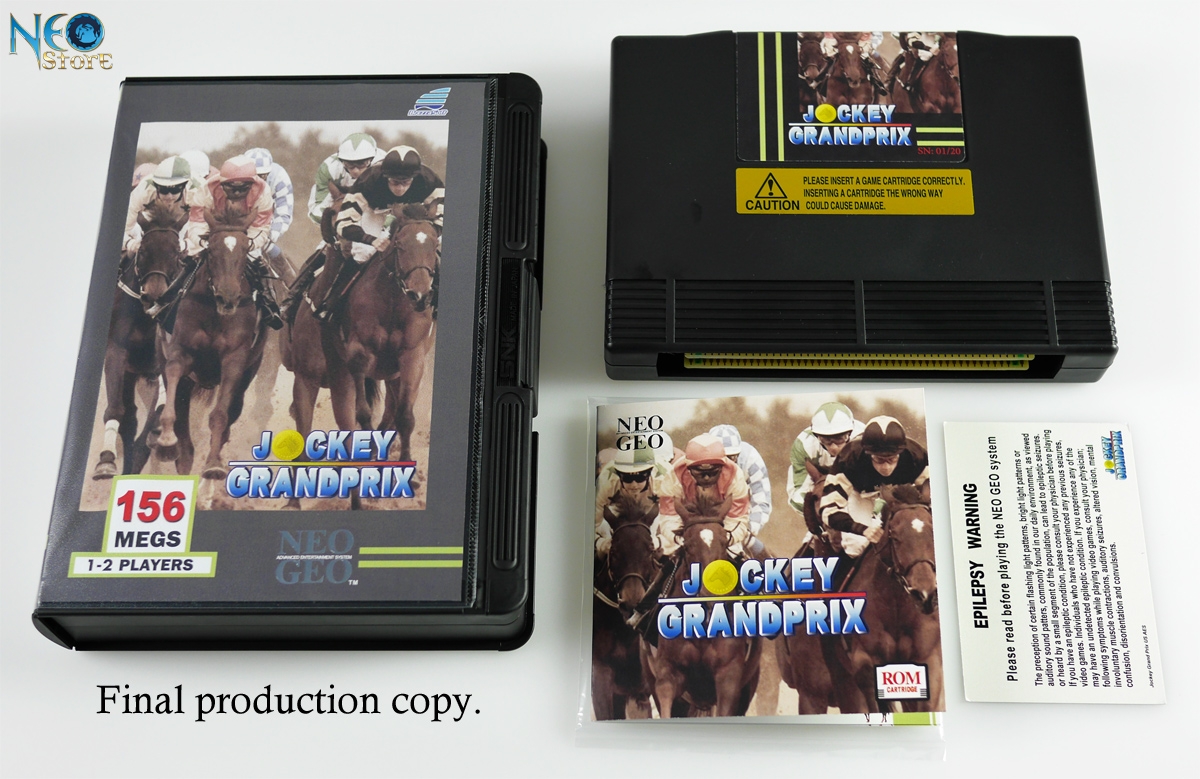 Knight's Chance prototype made by "DGE":

I'm not at all saying anyone will be scammed buying this, on the contrary I'm sure the game itself as well as the electronics involved will be worth every dollar spent on it. It is an original, indie developed product that will sure be of high quality. I do not want to judge anyone buying it or involved in the game/art.

As for myself though, I’m having doubts if I could stand to buy anything that is connected to "DavidG", even if this might be one of the few occasions he has done something good for the Neo. His next scam is most likely already being planned and I don't want to feel like I have funded it in any way. Nor do I want to profit from the skill and knowledge he has obtained for the purpose to con people.


I know a promising game when I see one and I’ve heard of the good (surely earned) reputation that you (JMKurtz) have. Which leaves me in two minds about this. I have the upmost respect for the work of the developers/artists involved and want to support them. So please believe me when I tell you that I’m sorry for dragging this DavidG bullshit into your thread, but it would be important to me to know if he has/had a part in the development of the boards. If so why, what did he do and will he profit (directly or indirectly) from sold carts?
Last edited: Sep 8, 2013
J

David did help me solve design issues and his knowledge saved me hours upon hours (maybe months) of R&D time so I give him credit for his help. He offered his assistance for free and asked for nothing in return so he is not profiting from my game.

His logo is not present on the final prototype PCBs nor will it be on the production version.

Maybe I should post a new picture of the latest design since the PCBs are different now.

thanks for clearing that up. Sorry again for doubting. I'm looking forward to holding a "Knight's Chance" MVS cart in my hands and spending nights upon nights playing it!
Last edited: Sep 2, 2013

Man, I wish the whole DavidG thing went down differently. The guy has legit skills in hardware design. He could have made a fortune legitimately in this hobby.

This looks more like a long lost proto than an indie release. Awesome work!
L

Xian Xi said:
That's exactly what I mean. When people hear the word "homebrew" they think of poor/low production games made by someone that was bored one day. The quality of games being made now under the same belt by NGDEV and Neobitz need to be categorized differently. And these games are only going to get better and better.
Click to expand...

RabbitTroop said:
Man, I wish the whole DavidG thing went down differently. The guy has legit skills in hardware design. He could have made a fortune legitimately in this hobby.
Click to expand...

Yes it is... but I'm guessing he attained those skills by figuring out how to best rip people off... maybe his only motivation for learning was his criminal energy. Scumbags stay scumbags. At least he saved Jeff some time on figuring out how to get the board design down...

Now the question remains. Where will it be available and what will the price be?

Like others, I can't wait for this release. And is that a Knight's Chance deck of cards with the collector's edition? That's awesome.

Cross posted from Facebook, keep in mind these are only estimates and can change depending on actual production costs.

I've had a few emails and a couple comments here, so, my current pricing is looking like:

These prices are subject to change depending on pre-order counts and final production quotes.
Click to expand...

There's a 50/50 chance of a home cart version. Depends on if I can secure game boxes & shells.

The game has been written to support both MVS (credits) and home mode.
Click to expand...

Thanks for sharing, XX! Preliminarily, I'm on board for a standard edition. I just don't know if I can justify the extra $70 for a shock, poster, and playing cards (ones I'll never open for fear of killing the value).
Last edited: Sep 10, 2013

I blame the Nigerian wife

Xian Xi said:
Cross posted from Facebook, keep in mind these are only estimates and can change depending on actual production costs.
Click to expand...

Sounds fair to me. I'll go with a standard MVS version. Good enough for me and the 60USD less will make up for the additional shipping to europe.

TikTekTak said:
Sounds fair to me. I'll go with a standard MVS version. Good enough for me and the 60USD less will make up for the additional shipping to europe.

Yeah, it's actually $70 different... and I agree. I'd love the cards and shock, but the pot needs some sweetening for $70. I'm definitely in for a standard, though

I really like what I see. Although these card/chance games aren't my favourite ones, I do see myself buying Kight's Chance. It simply looks astonishing.

Those carts look ace. I'll probably go for a LE depending on what the cover looks like.
G

LE for me, although if AES carts are made I will go for one of those instead.

I wish I had the money for that. Looks freaking awesome. Congrats to Neobitz for what looks like a very high quality product.
Z

I hope it comes out soon on the Neo Geo AES. I have been looking at this title for some time now. I have read about it on Jeff's Facebook page. It appears to be in the same vein as NG

EV:TEAM. (who also has original parts built by themselves). I really like the intro animation. It appears to be a gambling style of game from the looks of it with a sword and sorcery fantasy setting. The closest thing to that would probably be the unreleased pinball game Last Odyssey which can be found on YouTube if you are interested in seeing it. I wonder what the tariff on this title will be on home cartridge format.
You must log in or register to reply here.
Share:
Facebook Twitter Reddit Pinterest Tumblr WhatsApp Email Share Link
Top