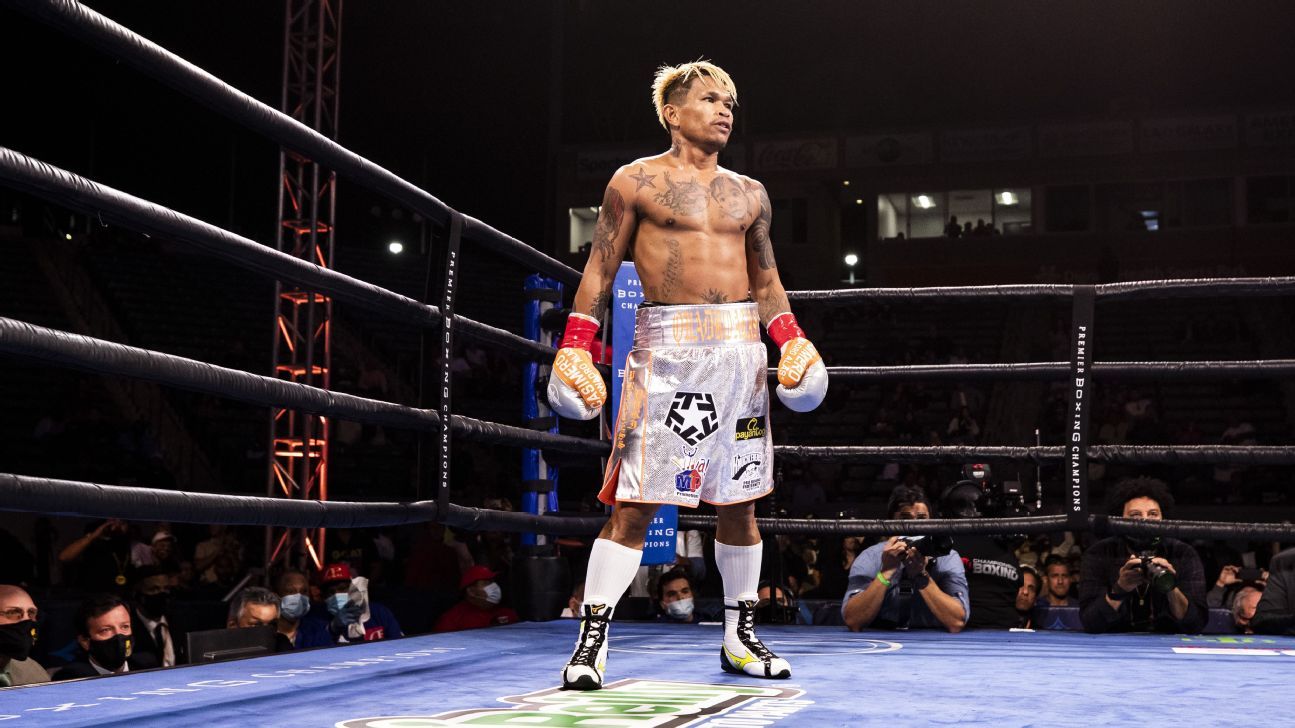 A complaint filed against John Riel Casimero in the Philippines says the bantamweight titleholder inappropriately touched a 17-year-old girl while she was sleeping in his hotel room last June.

Basically, a 30-something world champion boxer lured a 17 year old starstruck fan back to his hotel room and then molested her in her sleep.
Click to expand...

Damn, boxers like to do silly shit. Hopefully he gets a bit of time for being a jackass.

Another HUGE robbery. English fighter robbed blind in Scotland by the Scottish fighter, continuing the recent tradition of British boxing being a fucking joke.

Martinez vs. Ancanjas fight was great.

Hopefully Martinez gets the Win

Martinez gets the decision.

Lovely fight
Happy for our kid
The translater is a certified twat, his translating is horrible, lazy, dumb. Martinez was quite eloquent, some of what he said should have been translated.
He said he wanted to buy his mum her first home. These kids come from very humble - poor backrounds, but some are able to carry it as a badge of honour

Glad Ancajas finally lost. He held that belt hostage fighting no-hope bums for six years. He didn't defend it against a quality opponent one time and just got beaten by an untested fighter.

Ancajas just held that belt and fought nobodies while the likes of Estrada, Chocolatito, Sor Rungvisai, Cuadras, and Ioka were going to war over and over and over again.

Soft stoppage. Postol deserved to finish that fight. He went the distance with Terence Crawford, Josh Taylor, and Jose Carlos Ramirez. He was defending himself intelligently. Shame to do that to a former world champion like Postol. Russell was going to win on the cards anyway.

Russell is such an awkward fighter, I switched off around the third round

Too bad Gutierrez got COVID. Would've enjoyed seeing him against Colbert. Hopefully the replacement we got shows up to fight.

DevilRedeemed said:
Russell is such an awkward fighter, I switched off around the third round
Click to expand...

Russell would be a nothing fighter if he wheren't part of the clan.

Haha, Garcia is absolutely taking it to Colbert right now. Didn't see this one coming.
S

famicommander said:
Haha, Garcia is absolutely taking it to Colbert right now. Didn't see this one coming.
Click to expand...

Colbert was in survival mode and had no answer for Garcia. Colbert kept backing into the ropes trying to bait Garcia, but couldn't do anything from that position. His corner told him to stop with that BS, but he kept doing it and kept getting hit.

Colbert was too cocky and got what he deserved. Never underestimate another fighter.

I look forward to Garcia getting his WBA title shot vs Gutierrez.

The biggest fight in the division is in April, though: WBO champion Shakur Stevenson vs WBC champion Oscar Valdez. Valdez is currently not ranked by Ring or TBRB due to a failed drug test, but he's probably still the second best guy in the division. I expect a great performance out of Stevenson.

The last piece of the puzzle at this weight is Kenichi Ogawa, who is the IBF champion. He has a mandatory defense against Rakimov coming up.

April 9 is the new date for Gennadiy Golovkin vs Ryota Murata.

If Golovkin wins, he awaits the result of Canelo vs Bivol in May.

The WBA will allow Russian national Dmitry Bivol to defend his WBA light heavyweight title against Canelo Alvarez. But he will not come out with a Russian flag, they will not bill him as from Russia, and they will not play the Russian anthem.

It's a weird situation for Bivol. He and his family have lived in Russia since he was 11 (he's now 31), but he was actually born in Kyrgyzstan to a Moldovan father and a Korean mother. At a press conference today he stopped short of calling out Putin directly, and understandably so since his family is still in Russia, but he said he wakes up every day hoping to read the fighting has stopped.

Really a shitty situation for him. If he doesn't speak out against the war he probably won't be allowed to fight, but if he speaks out too strongly against it Putin could do something to his family back home.

David Benavidez vs David Lemieux for the WBC interim super middleweight title has been set for May 21. Lemieux is WAY past his prime but he's still only the second world titlist that Benavidez will have faced so far (the other being old man Dirrell).

If Benavidez wins and Demetrius Andrade beats Zack Parker for the WBO interim belt, there is talk of Benavidez vs Andrade. The winner would have 2 interim straps and be the mandatory for the eventual Canelo vs GGG III winner.

But we all know Andrade never fights anyone good, so it seems like he'll find a way to duck it.

Meanwhile, Jermell Charlo vs Brian Castano II for the undisputed WBA, WBC, IBF, WBO, Ring, and lineal super welterweight titles has been rescheduled for May 14. It was supposed to happen sooner but Castano hurt his arm. Presently Castano has the WBO, the lineal title is vacant, and Charlo has the other four belts. The first fight ended in a draw even though Castano whooped his ass.

Joshua vs Usyk has been put on hold. The governing bodies and Joshua himself have said that they will allow Usyk all the time he needs and they'll keep the rematch waiting for him.

There are two big fights this weekend.

Tonight on ESPN, Jose Carlos Ramirez vs Jose Pedraza. Should be a decent scrap but I feel like Ramirez has a lot more left in the tank.

Tomorrow night we'll see if the recent trend of upsets at super flyweight continues on DAZN. The legendary Chocolatito will face Julio Cesar Martinez, who is coming up in weight just like Rodriguez did when he upset Cuadras last month.

Another garbage opponent for another Gervonta Davis PPV. Unranked Rolando Romero, who was going to be the original opponent last time before he was replaced by (the much better) Isaac Cruz because Romero got into a sexual assault case.

Watch them throw two fossils against each other for the co-main. Robert Guerrero vs Devon Alexander or some shit.

Fulton was trying to line up Murodjon Akhmadaliev for a unification, but he has a mandatory defense first.

So instead he's fighting Danny Roman, who in my opinion is the best available fighter. I actually thought Roman got robbed when he lost his two titles to Akmadaliev, so it's good to see Roman getting another title shot here.

Fulton continues to fight nobody but the best. Roman will be his sixth consecutive opponent that was either a former world champion (Paulus Ambunda, Roman), undefeated contender (Arnold Khegai, Isaac Avelar), or an undefeated reigning world champion (Figueroa, Angelo Leo)

Absolute master class by Chocolatito tonight. The younger, stronger champion intentionally missed weight to try to bully him and Choco was having none of it.

With Pac retired, Chocolatito is really in a three man group with Donaire and Canelo as the top active fighters.

We're really lucky that Donaire and Choco are still fighting at the level they are. Absolute legends.

Maybe add Loma to that tier?

No. Not even close.

Choco and Donaire basically did what Lomachenko has done over his 8 year career, except over 17 and 21 years respectively.

David Benavidez claims he wants to fight Caleb Plant in September if he beats Lemieux in May.

If both those fights actually come off and Benavidez wins them both, THAT'S what he needs to be doing to earn a Canelo fight. Just those two wins would easily trounce Benavidez's entire resume to this point.

I happen to think Lemieux is shot so Benavidez should be fine there, but I think Caleb Plant would honestly box his face off. Benavidez is too basic for him.

No robberies on the UK card today but not because they didn't try.

2 division world champion Erica Farias, the queen of Argentinian boxing, nearly got robbed. She won all 10 rounds today and barely got out of there with a split decision win. And at the end of the fight the ref deducted a point from Farias for a phantom foul.

Just because the robbery didn't go through, though, doesn't mean the scores weren't shameful. To win every single round and barely escape with a split decision win is absolutely disgusting.

It's also absolutely piss-poor matchmaking. This was Ryan's 4th pro fight and they picked a future hall of famer that can still go? That's what tipped me off to this being a potential robbery weeks ago. They probably figured that Ryan was so big she could go the distance with Farias and they'd rob her no matter the outcome.

I firmly believe that if Ryan had legitimately won 2 rounds, they'd have given her the fight. Farias had to win 15 rounds in a 10 round fight to get a unanimous decision, I guess.

The main event was an epic war that ended in a scary knockout. Michael Conlan was out before he hit the ground, then fell through the ropes. He was down for a long time, they didn't show any replays, they didn't show the paramedics tending to him, and they didn't show him being stretchered out. Very scary stuff, but it sounds like he's in stable condition and conscious. Good news.
You must log in or register to reply here.
Share:
Facebook Twitter Reddit Pinterest Tumblr WhatsApp Email Share Link
Top