Written by Shimitar: God of the Universe​


My first experience with King of Fighters was the PSX port King of Fighters 95. I was always an SNK fan from the start and tried to keep up to date with them. I was overjoyed when KOF 95 came out, after a while I was able to acquire a NEO GEO system and pick up this expensive cart. To me, it was well worth it.

The graphics of this game is simply amazing, some of the best on the Neo Geo. It comes in at a heavy 688 Megs, the same as Garou. The characters are huge and very well animated. The Neo Geo still has some life in it. New frames of animation were added since KOF 99, especially Kyo. His moves look so much better. The backgrounds were pretty bland, almost like if they just chose a backyard to fight in. Not all backgrounds were bad, but KOF 99 had better backgrounds. But I really didn’t pay attention to them while I was playing the game. So don’t let that discourage you. Other than that, this is one the best looking KOF games. 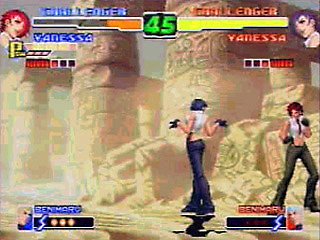 After listening to KOF 99 AST, the music in this game cannot even compare to the AST of KOF 99. But I did enjoy the music it has some good tunes, especially K’s team. The voices and sound effects were pretty much the same, so no complaints there. The music doesn’t really affect the gameplay for you can still have heated battles and not really care for the music.

This is like playing KOF 98 and KOF 99 put together. This game serves as a correction to some of KOF 99’s flaws. Returning from KOF 98 is the emergency escape system, which I believe is one of the greatest assets to a fighting game. In KOF 99, you only can dash back but then dash forward; in KOF 2000 this is no more. The emergency escape system allows you to roll back and forward at will. The striker system has greatly improved as well. Now strikers can be called from almost any position from standing to throwing. A ton of new strikers were added in this game making endless possibilities of making your own custom combos. One of my favorite strikers is Another Iori. Some strikers are another version of regular characters, providing new striker attacks for that character, such as Another K’ or Another Iori. KOF 2000 has one of my favorite fighting systems in KOF, my other favorite was KOF 98. This is why I love the game so much! 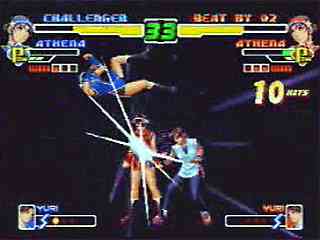 KOF 2000 is definitely a great buy, only if you have the money. Buy it if you can! This is a very expensive game, but it didn’t stop me from enjoying it. Expect to enjoy hours of fun especially with a friend, this game can get addicting! If you haven’t played KOF 2000 and have it at a local arcade, give it a try! All I can say is the King of Fighters just keep getting better and better and I hope I can say the same for KOF 2001!