Presentation: King of Fighters 96' is one of those titles that is time based. It's a good game in terms of its presentation. Good backgrounds in this game and the music is good also. It was originally my favorite KOF. The colors are good and it has my favorite two stages in KOF. The gondola boss team stage and Iori's stage top out as my two favorites. Woman fighters team is great to.

Game Play: King of Fighters 96' is a earlier variation of what 97' would be, and then what 98' perfected. There also exists a weird bug to do combo's with CD hits in this game that you should check out. It allows you to do multi hitting CD hits that can dizzy and opponent an do crazy damage. It breaks it to some extent, but it's over all a fun, playable game. In terms of the way things work, I actually prefer 95' in terms of game play to 96' if I had to choose between the two. 96 is a game that serves as a bridge to better games in the series.


Controls: They feel typically SNK, very responsive. Make sure if you play this game in modern times your TV isn't choking out from input lag. Also, I see a lot of players out there who enjoy these games and just mash buttons. If you're one of those players, stop and go learn the characters moves. You'll get more out of it then just going in quick without learning some of the depth of game play. 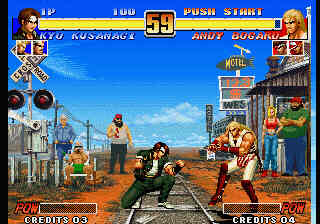 Final Thoughts: King of Fighters 96 is one of those games that you can do without if you are not a Neo-Geo purist like me. I have/had to have this, because its a Neo-Geo fighter and I love Geese and Krauser. However, if you're not that hardcore, you can just skip to 98'.