Garou : Mark of the Wolves Review

Alright let me start by saying the schematics of this game are not a typical fighter, they have been completely enhanced and I believe Garou is the most advanced fighter to date, "why?" you ask well its simple, back in the early 90's games like fatal fury & street fighter 2 were released these games took off but sadly street fighter took the coins in until fatal fury 2 this gave SNK a high selling point to arcade vendors everywhere. So it is 7 odd years later and we have Mark of the wolves. 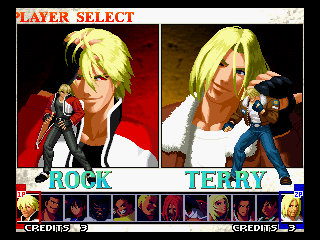 The first thing you will notice is the graphics in this game they are easily said to be beautiful, or amazing it is obvious why the characters are riddled with insane amounts of animation lets take Rock Howard (son of the great geese) he moves flawlessly across the screen he feels like a real human being this is what I decided in 1999 that I had to have this game because it was a masterpiece,... amazingly i had not even played this before I wanted it AND BAD! I started to play the game when i got it and LET ME TELL YOU THIS IS A FLAWLESS EXPERIENCE! The reason is because of the music, PLAYABILITY, and line-up. Now let me tell you about this games backgrounds, they are detailed to a exact movement and if you pay attention to certain aspect you can see how the backgrounds change even when your not noticing, as for the game play it is very responsive because it has a new system which I love this is called the JUST DEFENDED SYSTEM this allows a character to block the exact time a move hits, and you gain a little energy back from this I liked this system especially because it was tilted towards the more advanced players.

Rarely talked about in reviews are the special's they consist of decent to down right cheesy I.E Tizoc/Griffon Mask but I have to give credit to the special system because they made the moves a little easier to perform, they consist of double rolls, back rolls ext. this makes the beginner enjoy the game too. The one complaint I have about Garou is Tizoc he is just down right CRAP he takes a third of energy each throw and is fast despite his size, but this character is great for a beginner, because he has easy use. One thing any fighter fan can not mistake that GAMEPLAY IS EVERYTHING.


Line-up,....... Good despite my friend Lawrence did not get his favorite character ANDY

well I have my gripes about this because certain characters are cool, and other's are annoying as all hell. Lets start with Terry, amazing has a lot more skilled playability a must for the advanced and then there is Kain anyone who has used him knows he is the games most advanced character, but I have to say everyone is pretty much balanced except for Khushnood Butt AND TIZOC!!!! Butt is the single most unskilled fighter in this game he has a move for everything (and the most beautiful stage I might add) .......Tizoc he can kill you in 3 fierce throws, 'nuff said. Overall Garou is a must have if you dislike this game I understand but heck, its fatal fury its started neo fighters and will always be 1 in my book.