The game that started it all, Fatal Fury was SNK's first foray into the fighting genre on the Neo Geo. Was it a rip-off of Street Fighter II? A lot of people thought so, but the answer is no, it wasn't. Fatal Fury had been in development at SNK since 1990, around the same time (some claim even before) Street Fighter II's development (both were released in 1991). There is proof of this relevant age in Fatal Fury's title screen: Terry looks at a poster with the title and a copyright 1990. 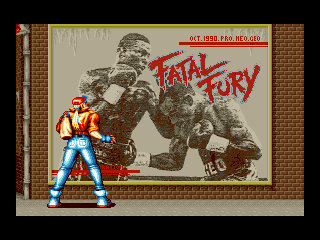 Regardless of cross-influence between Capcom and SNK (although there certainly was after 1991), Fatal Fury blazed the way for a system that became known (rightfully so or not) as "the fighting system." Before I move on the rest of the review, I want to share some other interesting trivia: 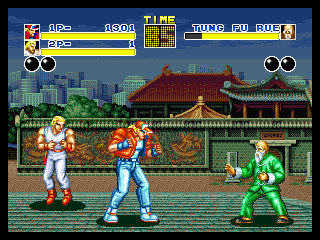 When it came out in 1991, Fatal Fury had some nice graphics. However, since then SNK developed much better detail, much bigger characters, and the zooming feature that was pioneered in the Art of Fighting -making Fatal Fury now look very dated. Still, there are some nice colors and detail in all the backgrounds. It's also interesting to see the original portraits of Terry and Andy, and the famous final death scene of Geese Howard (well, supposed death). The one character and stage I should mention is Tung Fu Rue. An old martial arts master, he starts fight as a normal old man, then, after a few hits, he transforms into a muscle-bound behemoth -this was a stunner in the early days of fighters. Also, his stage goes from stormy clouds to a full on rain. While the graphics are not impressive today, this was another break-through when it first premiered in arcades (and it found its way into King of Fighters '99). Fatal Fury's cut scenes and bonus levels are drawn well, too. 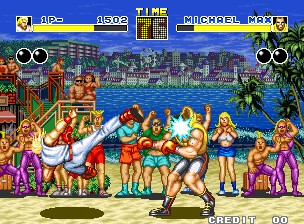 The sound effects and voices in Fatal Fury are good, the only problem is you can't really hear them. Fatal Fury is another victim of SNK's early experiments with sound. Fortunately, Fatal Fury also marks the beginning of SNK's amazing forays into fighting game music. The music for the Pao Pao Cafe, Hwa Jai's stage, and Raiden's classic theme song are all outstanding. Overall not bad.

Fatal Fury isn't perfect in this category. There are only three selectable characters (to be more accurate, heroes within the storyline). The punching and kicking is so-so, but some of the special moves are inherently unfair (benefiting the player). If you keep using Andy's elbow dash over and over again, you can keep your opponent form ever getting up. Barring that technical boo-boo, some of the other special moves are not very responsive. The two planes of battle (on some stages) do add to the complexity of the game, but SNK ended up giving this whole category a major overhaul in Fatal Fury 2. Still, the game is playable.

...anyone who can fall that far and STILL live for three hours must be immortal.​

Bobak!: is working on cloning an army of mutant sentient hamsters. Unfortunately, much to his chagrin, it is not as easy to do as it seems (he wonders how so many evil scientists could be wrong). The one cloned hamster that was sentient ended up being a pacifist and now lives on a beachfront pile of newspaper shreddings in Boca Raton, FL.