Eight Man: A Game that Begat a Revival?
by Bobak!

Eight Man is based off a Japanese cartoon series from the 60s. 56 thirty-minute episodes of Eight Man (English title: 8th Man) aired on Japanese TV from 1963-1965. While the series was revived in the early 90s as a live-action movie (8-Man, 1992) and second animated series (8 Man After, 1993), the Neo Geo game preceded them in 1991. This seems to imply that the video game was based off of the 1965 TV show and was on the forefront of an early 90s revival of the series. How much of an impact the Neo Geo had on this revival is unknown, but I'd like to think that it certainly didn't harm its re-emergence.


The Evolution of a Super Hero​


The manual goes a little into the storyline, laying down a comic-book sort of storyline. Eight Man is the eight member of a crime fighting units who's secret robot identity is known only by the division chief. In times of crisis both he and his partner "Nine Man" (no joke) are sent out to save the day. You are trying to stop some kind of evil brain from stomping the city in its new giant robo-suit. The finale comes out of nowhere: you fight what appears to be Death on a freeway overpass. Neither the game, instruction or any of the support material I've seen or read explains this final battle. I guess the game designers were feeling depressed and tacked it onto the end. The ending is pretty lame.

The game itself? So-so. The big gimmick is the fast pace. There are quick scrolling running screens that will remind you of Sega's famous 'blast-processing' marketing ploy back in the early 90s. Other than that, its another run-of-the-mill beat'em up. 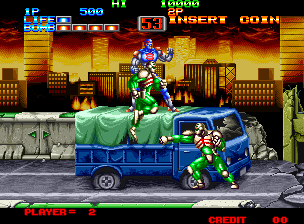 The game keeps a nice comic book style for its cut-scenes, but the levels feel uninspired. There is a very odd neon color scheme to a few scenes, but the rest of the screen is usually gray or blue. I liked the attack animations of the characters, and the game frequently scales characters in and out without a hitch.

Now can some explain to me how the Predator made it into the game? 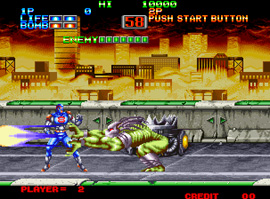 MUSIC/SFX: "Ape Man!"
No matter what arcade you were in, you'd always know if they had Eight Man on their MVS. The game boasts one of the clearest intro voices of all time (although it was unclear as what he actually said):

"Runs as fast as lighting,

Once this voice brought you to the machine, you noticed that the game had nothing to do with apes, but rather was a fast moving super-hero game. The in-game voices were sparse and completely unintelligible. The rest of the sound effects seemed to be a collection of generic Neo Geo sounds from other games (save for the completely out of place squeaks made by the armadillo robots). The super-hero themed music is forgettable. 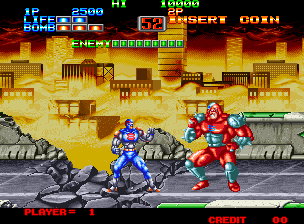 Simple, no frills running and punching with special bomb-attacks thrown in for flash. There are power-ups that increase your attack capability and increase your bomb attacks quite substantially. The controls are responsive, but numerous cheap hits and the traditional, ludicrously unfair Neo Geo final boss keep it from scoring high. There are only four levels, and they are broke down into 2-6 short (sometimes ridiculously short) areas.

Unlike the speeds of games like Sonic the Hedgehog, the speeds in Eight Man are only window dressing and do not affect the gameplay. The game isn't terrible, but there's very little one-player replay and only moderate 2-player replay. Maybe the fans of the series will be able to get more out of it.

So there you have it, a so-so game with an interesting history. If your into Neo Geo and into Anime, you may want to consider tracking down a copy of the VHS collections of the original series or DVD collections of the latter series (both are available on Amazon). Or you might want to just skip it and buy one of the King of Fighters series. It's up to you.