Crossed Swords: A Quick Review of an Original Title by Bobak!

Crossed Swords was the Neo Geo's second attempt at the action-RPG (Riding Hero was the first). Blending a first-person person action platformer (like the Super Spy debacle) with a "save-money-and-buy-power-ups" format set in a medieval/fantasy world. It's greatest feature is 2-player simultaneous play.

A bit repetitive, pseudo-first-person perspective. I remember seeing the game in 1991 and being impressed by the wire-frame character representing the player. While it wasn't the first time this technique was used, it was used well here. Crossed Swords follows the path of other early Neo titles (for better or for worse) and tries to use as many big, bright vibrant colors as possible without too much concern over believe-ablity or taste.

Yikes! Where do you boys shop?​

Nice at first, but soon repetitive. The sound effects aren't terrible, but we're looking at a very early Neo Geo game -so don't expect too much. It's hard not to laugh at the weird, "coming-from-the-end-of-a-hallway" effect that the early the Neo Geo experimented with in order to create 3-D sound (Sphereo Symphony). 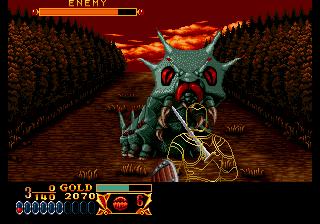 The control scheme isn't bad, but the pseudo-first person perspective inherently allows for some cheap hits and confusing maneuvers. The reason this game has had lasting appeal is the 2-player option, which allows for hours of mindless fun and yelling as you play with your friends. If you play it alone, you'll notice the game gets repetitive quickly (Block. Slash. Dodge. Repeat.). 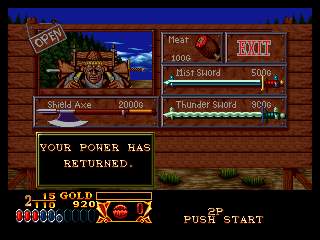 Definitely better than The Super Spy, but that isn't saying much. Some people still look fondly on this title, I was never one of them. Still, to be fair, it's one of the more unique titles on the Neo Geo.

Bobak!: knows the answers to all the great mysteries of life, expect the combination to the safe (or where he put his copy of Aerobiz for SNES).