Daily Check: What shooters are you guys playing ATM?

wataru330 said:
PCE•CD= DownLoad2. One of the only sidescrollers I truly enjoy. Cut scenes, control, weapons system, and T’s Music…this game is my favorite yoko pew.
Click to expand...

I think I enjoy the presentation more than the actual game. It's not bad per se but not too tier, imo.

Cutscenes are great though.

I got to the end of Power Strike II (the Euro version of GG Aleste II) and at the first form of the final boss the graphics got all fucked up and I died.
O

Sylvie said:
Einhander is really exciting, I was pleasantly surprised to pick it up again briefly in the past year. Really holds my attention despite not being very good at it
Click to expand...

roker said:
I've never tried to do a 1cc, but I've enjoyed the fuck out of this game. It doesn't play like most shooters.
Click to expand...

Couldn't agree more with your comments. Meanwhile I collected some further reasons, why this game is such a slap in your face. For once, the bullets are incredibly slow, so it needs just a couple of smaller ships to shoot at you and it gets instantly claustrophobic. Explosions tend to hide either a bullet or a smaller craft. When you fly into one to snatch a weapon, you're often dead on arrival - if you don't, you loose that weapon.

It's also hard to time the moment when an enemy shoots at you, so you'll dodge right into a bullet, you thought would be shot earlier. Other shooters will give you the certainty, that if you are at a certain time at a certain point, enemy reaction will always repeat itself. That's not the case in Einhänder, where even the very first wave of enemies will end up in a different formation on each start, even if your position will be the same.

Squaresoft is just really especially cool in the mid-late 90s .

Got the clear for Power Strike II.

Playing Super Raiden on the PC Engine right now, "almost" no-missed it but I guess as I was too cocky as literally the last stretch before the boss ate all my lives, then all my continues. lmao.
edit: my life is a lie, I was playing on a lower difficulty this whole time lol. Back to the drawing board
Last edited: Jul 31, 2021

Got a 1CC on the easy route of Darius Gaiden w/ autofire. Congrats! While you mention Jamma... I heard that the arcade version is one of the toughest STGs to clear on one credit, contrary to the Genny version. I hope that I'll get the chance to try it out someday. Did you ever played the AC original? I'm curious to know, if it is indeed that hard.

oliverclaude said:
Congrats! While you mention Jamma... I heard that the arcade version is one of the toughest STGs to clear on one credit, contrary to the Genny version. I hope that I'll get the chance to try it out someday. Did you ever played the AC original? I'm curious to know, if it is indeed that hard.
Click to expand...

Specifically, the Japanese version 1 player romset is the hardest version, or so I've been told. I played it as part of a La Calice Cup STG tourney a couple of years ago, and it is indeed very hard. I think I made it to stage 2 as my best.
O

egg_sanwich said:
I think I made it to stage 2 as my best.
Click to expand...

Then I'll imagine making it only through the attract mode. Ah well...

Been in a Data West mood. It’s been Rayxanber II, III, and Vajra (guilty pleasure) on rotation for the past few weeks.

Love the Yasuhito Saito soundtracks to these games too

Decided to test out the Game Gear to SMS hack of GG Aleste II and lost nearly all my lives in the first level only to take the same game all the way to the final boss on 1cc ... then I lost. Ugh. I'll probably play this again.

You definitely have to tell me some of your thoughts about that one. I was very impressed about nearly everything except... the music. It was awful, almost a gamebreaker and I love chiptunes, especially on the MD. Sure, in the end it left me with a so-bad-that-it's-good feeling, but the first impression was shocking. Hey, and good luck with the GGAII clear!

oliverclaude said:
You definitely have to tell me some of your thoughts about that one. I was very impressed about nearly everything except... the music. It was awful, almost a gamebreaker
Click to expand...

soundtrack is definitely the weakest part, but I find some of them ok'ish. The title theme with this faux guitars is not bad. Definitely one of those soundtracks you sorta forget as soon as you turn off the system.

MD definitely has some classic soundtracks for shmups, a few favs:

roker said:
soundtrack is definitely the weakest part, but I find some of them ok'ish. The title theme with this faux guitars is not bad. Definitely one of those soundtracks you sorta forget as soon as you turn off the system.
Click to expand...

Thx! I agree, it's not that bad, but coming attached to one of the best games on the system it feels like a real downer.

roker said:
MD definitely has some classic soundtracks for shmups, a few favs:

Excellen! But... not one Technosoft game in it? Too obvious, right? Well, then let me see what I can put against:

Crying/ Bio Hazard Battle − Unmelodic, tuneless, maybe even atonal. I admit it's something special, but K.N.U.'s base rocks hard. Plus that minimalistic track in Stage 7 is one of my all-time favorites. If you're a fan of electronic music like me, this ost is a revelation.

Verytex − An unremarkable STG with one of the best soundtracks on the Mega Drive. Never fails to amaze me how this could happen.

Slap Fight MD − Koshiro delivers. It sounds as if he wanted to put a lot of his inspirations together into one soundtrack. Especially his love for Konami music. It's a hit!

Ports: I'm a big fan of the Tatsujin/Truxton ost, ported by Sega. There's no bass drum, not any percussions at all, just some lo-fi melodies. Can't explain it, but I like it a lot. Then there's also the Dangerous Seed ost, which is very nice.

Wuuut?! I love it. It's quite versatile, surprises with each level. The 2nd Stage is like a ballad from a western movie, 3rd's like a Bach fugue and 4th, which comes with those whipping industrial percussions and oddly funny melodies, kind of country, is again something else. Ok, it's a bit cumbersome at times, but "worst"? Seems a bit harsh, even if you don't like it.

Has anyone here played Star Soldier for the N64? I'm admittedly not the biggest 64 supporter, but I have a dozen or so games for it that I like, and would like to pick up a few more. I saw that this is about the only real shoot em up that you can get for it, and wanted to ask around before shelling out for it. As long as it's decent, I'd probably like it as I'm not hard to please when it comes to shmups. Plus, I feel like that little 64 stick would lend itself well to the genre.

I have it, but, haven't played it in so many years, I can't remember much about it. I think it was decent, but, nothing special.

I played through Star Soldier 64 a couple of times today. I enjoyed it. It has well-detailed sprites set within a 3d universe. The music is sort of Orbital-ized jazz which I really dug. Just a fun space shooter with a decent challenge, neither balls hard nor pussified. The overall design and aesthetic is cool with futuristic robots who talk to you and such. It's a neat game.

If you die in the later levels and lose your power-upped weapon, you're pretty much screwed until you can get it repowered up. In that situation, I basically dodge like crazy and focus on collecting the power ups to get back. The bombs, while limited, do a ton of damage, and can really do a number on the bosses, so conserve them and it makes the boss fights fairly easy. At least on the default difficulty.

After talking to a buddy who's into the 64 (I've never been much of a fan, so this is mostly all new to me), he said that Japanese games can be played on US systems by simply swapping the cartridge backs. So I picked up the Japan version of this game because it uses mostly English anyway, and it cost me about half of what the US release goes for. So, just throwing that out there in case anyone didn't know that. Also, I'm not sure, but it's possible there are differences between the US and JPN releases of this game.

He said that I should look into a rail shooter for the 64 that only came out in Japan called Sin & Punishment. Anyone here ever played that one?

Taking another run with Einhänder. It's incredible how different this game becomes, once you play with the Schabe police craft. A laughably small hit box, a powerful fire-and-forget Wasp weapon with unlimited ammo... you can even throw your police lights on. So much easier, it's almost relaxing to play it now.

oliverclaude said:
Taking another run with Einhänder. It's incredible how different this game becomes, once you play with the Schabe police craft. A laughably small hit box, a powerful fire-and-forget Wasp weapon with unlimited ammo... you can even throw your police lights on. So much easier, it's almost relaxing to play it now.
Click to expand...

I'm going to have to try that. I haven't been playing shmups. Been too addicted to Racing Lagoon (Racing RPG by Square) since the translation got released.

roker said:
I'm going to have to try that.
Click to expand...

It'll feel strange at first, this ship's so small and seems underpowered. But shortly after you'll realise the comfort of having unlimited ammo and no need to constantly change your weapon(s). I can imagine, that Schabe was for many players the first ship they finished Einhänder with.

Playin some Deathsmiles II since it it’s the season!… 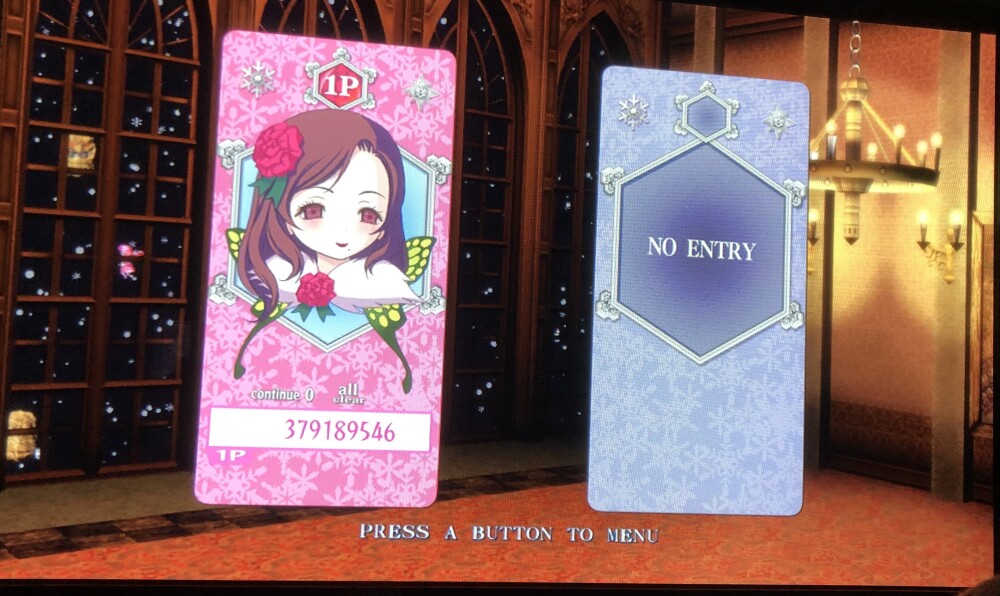