Hi, for a while now I've been trying to figure out why both of my AES consoles (low serial jap units) have this annoying issue with some of the early side-scrolling games. On games like Sengoku, Robo Army, Burning Fight, 8man, & Crossed Swords, I'll see these thin flickering vertical lines appear while the scenery is scrolling. They're sorta like thin white dotted lines that will flicker as you move your character. In Crossed Swords, I can see similar flickering specs on enemy sprites when they're in the middle and back planes (before they jump into the foreground). I've pretty much ruled out that this could be caused by dirty carts because I own multiple copies of some of these games and some are new old stock. Someone once suggested that it could be due to a bad LSPC2 chip but I don't really know this hardware well enough to mess with that.

Does anyone else experience this problem or know the cause?

I've found a few other threads that address the same problem but I see no good explanations or solutions:


Many thanks in advance for any advice that is offered.
Last edited: Mar 27, 2009

So this does not occur during vertical scrolling ?. A snap shot may help.
F

Thanks for the reply, I'll try to get a pic up soon.
F

ok, here are some photos of what I'm talking about. It's actually hard to capture a still image of this problem because the little dots that create these vertical lines are always flashing, creating a flickering effect. here are some pics: Crossed Swords has a similar problem but the flashing dots are spread out over enemies when they're in the background. It may be hard to tell from the pic, but they're all over these "gobrins."

So if anyone has any info or advice about this problem, PLEASE let me know.
Again, these glitches are much more annoying than they may look from the pics due to the flickering.

Looks like you could use a cleaning. Clean the slot good.
F

I cleaned the slot as best I could, with a soft bristle toothbrush and some water mixed with rubbing alcohol. It was difficult to get the bristles deep in there... I'm really not sure how good a job I did.
But the video glitches are still appearing, no different than before.

Any other thoughts? Does this problem look familiar to anyone?

I'm thinking maybe something is slightly corrupted internally, like Video RAM or something.
P

This problem i have too, I never find a correct answer for this.

Curious just Burning Fight and Sengoku 1 i got this problem too...the others games works normal....in the past i buy another Sengoku 1...thinking the problem is the cart...but not...the new one Sengoku 1 have the same problem....

I tryed clean the slot and the cart in the past whitout lucky...

Well, the thing is that i could solve that problem on my console doing a thing...

There is a Potentiometer, an Orange one, very near the video zone. I touched it and i noticed that the graphic glitches start to decrease and increase depending the movement, I continued until the garbage got rid. I could fix Fatal Fury Glitches and Burning Fight ones. I don't have Sengoku anymore, but i suppose it's solved on that game too.

Then i tested newer games, like Aof or Kofs or Kabuki klash, and they werk without a problem too.

I tried to do the same with another console, a japanese high serial number console, but i just could fix it partially... I don't know how it depends of machines, serials, boards... I really don't know. In fact, i don't know what is the proupose of the Potentiometer, I only know what i did... Maybe my AES is condemned now

It would be nice if anybody can tell us for what is that potentiometer there.

Disclaimer: I don't take any responsability if you touch the potentiometer and crash ur system.
F

Pepot, thanks for the info.

What exactly did you do to this potentiometer, and where is it located on the board? You just touched it a few times and the problem went away?
P

i just adjusted it, slowly, and i saw how the graphic glitches (Fatal Fury, Burning Fight) going increasing and decreasing, until they dissapeared, ( it was long time doing adjusting ) . But the thing is that I could do it with my japanese console (1xx.xxx) but.... with a japanese newer (3xx.xxx ) console i couldn't fix it perfectly (still glitchy, but less ).

The thing is... to know what is that potentiometer and what it controls, really.
L

Is it a potentiometer? Or a variable capacitor? If it's a variable capacitor near a crystal, the capacitor is there to 'tune' the crystal... it can only adjust the frequency through a narrow range though. I'm thinking the adjustment affects the sync frequencies, as to why that'll make lines appear *shrugs*

I use a normal PAL TV with SCART (RGB)

It's just at left of Crystal, yes !
L

Then I guess the trimmer adjusts the sync frequency. 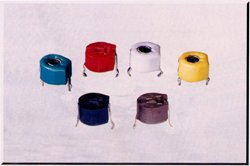 I doubt it, if the trimmer adjust the sync frequency the picture would start to roll.
L

It'll only adjust within a very small range, it's primarily there to adjust the frequency back 'on-spec' for aging crystals (they drift over time).

Alot of VCXO modules have a trimmer built into them for this purpose.

This is usually more of a real 'problem' for the radio guys though.
P

li_gangyi said:
Then I guess the trimmer adjusts the sync frequency.

YES ! It looks like these ones, Orange cover !
F

OK! So I opened one of my consoles and found the capacitor/trimmer with the orange cover and after some slight adjustments I have nearly solved the problem completely (there is still some very faint flickering occurring, but it's barely noticeable). Thank you Pepot and gangyi!

Do you have a good picture of the video area of your other console?
F

gangyi, thanks for the help, here is a photo of the console that does not have the daughterboard. Is there a way of tuning the crystal on this one?

I can't see the pictures cause the acount is inactive, but I think I have the exact same problem most noticable in Fatal Fury 1 on my high-serial-jp-AES with RGB-fix on my Scart-RGB-TV.

Here's a video I made quickly with my cell:
see video (mp4)

If there's any news how to completely solve that problem I'd love to know.

Did you try adjusting the orange pot?

No, not yet.
Since anybody can confirm that this is the same problem I'm not touching the thing.

Also I haven't tried to clean the carts.

I just took off the cover and tried to adjust the orange pot.
turned it just a little bit in both directions but either I turned not far enough or this is just not doing anything.

I'm experiencing those glitches in this games tested so far:

sidekicks 2
in the playfield, not very heavy but annoying

games that work fine without any glitches
viewpoint
raguy