​
Fighter's History Dynamite (A.K.A Karnov's Revenge) was the sequel to the very mediocre (although to many a guilty pleasure) and controversial Fighter's History. Remember the Capcom suing Data East incident? Man, those were the times. Well, those wacky and off the wall fighters are back for one more go. Round 2.... FIGHT!! 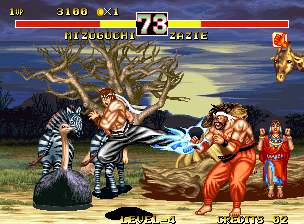 For 1994, pretty solid all around. Quite colorful yet gritty-ish and somewhat attractive. Most of the stages look great with cool features such as breaking a vase and releasing a snake which crawls its way out of the scene. A few stages were downright terrible and bland, but for the most part the stages were cool. Each round, it turns evening or rains, etc. Special moves look okay, but the characters' design and art is lacking. The projectile nullifying is a sweet sight indeed. Something to see for yourself.

Overall though, FHD's cast lacks the punch of other fighting games. Personality-wise; they are sorely lacking. But if you're an imaginative gamer like me, you can make up your own stories. ;-) 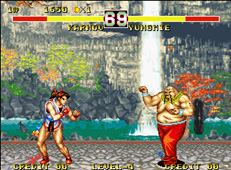 Sound effects are average. The music though was pretty good. Interesting note about FHD is: some fighting games signal near-defeat by flashing energy bars (Fatal Fury games, WHP) and others signal near-defeat by a flashing time clock (SF II). Well, FHD signals near-defeat by the music. As soon as someone reaches about 70% depleted strength, the music will speed up; creating several catchy and semi-chaotic tunes for the respective stages. It provides for a small adrenaline rush which is nicely executed by Data East. And who could forget that crazy game announcer?? "Mizoguchi Wiiins!!" "Ray Loses!"

This is your average fighting game engine. Yes, it is similar to Street Fighter, but the combos aren't as intricate or deep. The game's speed is fair and if you connect on certain areas enough, a piece of garment will fly off, rendering the opponent dizzy. (Don't get excited, the girls lose nothing vital, and to boot, they're pretty ugly, *tee hee*) FHD only has four buttons whereas the original had six. Nothing to write home about; nothing to complain about. You know what you'd be getting. 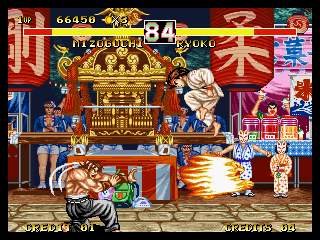 -Marstorious is pretty cool. He's Muscle Power meets Zangief. He has a dashing elbow and his "Double German" has good range, sucks opponents in from afar, and does major damage. Big guy even can do a Moonsault!

-Karnov's stage music is straight out of the "Karnov" arcade/Nintendo video game. It's wonderful to hear that tune once more; the speed version of it is awesome.

-Speaking of Karnov, although no Geese Howard or Neo Dio, Karnov's damn cool in his own right. A solid end boss with a great stage and classic tune.

-FHD's Clown is a LOT better then Savage Reign's Joker; in my humble opinion.

-Defeat FHD on any level without losing one round and you'll be treated to a one round match with a black bull. It looks identical to World Heroes 2 Jet's bonus round black bull.... by the way, ever drank Red Bull? Errr... sorry, off topic here.

-Capcom's Dan was inspired by Robert Garcia people claim? Well, Capcom also might have been "inspired" (if you wanna call it that, LOL) by FHD's Lee... take a look; there are some similarties...

Unfortunately Data East isn't too good at fighting game sequels. Only two new characters, both of which are at best adequate, and not enough new features. There is no super bar but there are "super moves" for all the characters. They're not as effective as other game's super moves, but to compensate, they can be done at anytime. 13 selectable characters, decent endings, decent gameplay, and nostalgia awaits.

Playing on Mizoguchi's stage for the first time; seeing it evolve from dawn to dusk and hearing Mizoguchi's music speed up as the characters scream and yell for their lives trying to outdo one another. Also, seeing Mizoguchi's Super Tiger Bazooka..... "UNNNNLEASH!"

This is a guilty pleasure-type game as mentioned earlier. Myself, I have some fond memories of the FH games. I was always a fan of the "underdog" 2D fighters. A true symbol of my childhood and innocence. Nothing flashy, nothing terrible, nothing great. Just an old school fighter for hardcore fighter fans and fans of Mid-90's clones. Fighter's History Dynamite-- a true staple of "The Golden Fighting Game Era".

(Editor's Note: If you can't get enough Karnov, be sure to check out