Breakers (ブレイカーズ, Bureikāsu) is a 2D fighting game released by Visco on December 17, 1996 for the Neo Geo. It received an updated version entitled Breakers Revenge (ブレイカーズ・リベンジ, Bureikāsu Ribenji) on July 3, 1998.

The game is rather obscure in the arcade and Neo Geo scene, likely due to its somewhat uninspired visuals and character designs, but it has gained something of a cult following thanks to its solid gameplay.

In 2015, Visco launched through a French distributor a limited edition of Breakers Revenge for the Neo Geo AES. In 2017, the original Breakers received an official Dreamcast release.

A collection including the two games, titled Breakers Collection, has announced for consoles and PC, coming in 2020.

When both players begin a fight with the same character, the challenger's character will receive a different name. For instance, Sho's double will be named "Jin Sawamura". This usually occurred in the game's arcade mode with a human opponent facing the computer. 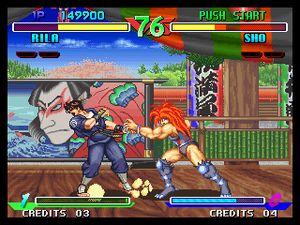 The controls of the game is similar to that of SNK's earlier installments in their Fatal Fury series (particularly Fatal Fury 2, Special and 3). The special actions are also similar to other fighting games from the same era, although the dashing and back-stepping techniques tend to differ between characters (some of them will roll on the floor for example). Additionally, the player can move while standing up after a fall. The game system emphasizes balance between characters by featuring an elaborate damage adjustment feature.

The player also can perform super moves by accumulating enough energy in their power gauge and performing the command (the power gauge can be filled up to three levels). To accumulate energy for the Power Gauge, the player must perform special actions such as taunting, dashing, back-stepping, rolling, etc. Like most fighting games, the player can cancel a regular move into a special move or special move into a super move, but the player can also connect one super move to another until their Power Gauge runs out, allowing the player to perform acrobatic combos. Because of its emphasis on damage adjustment, it is hard to spam the same attacks for great damage.

The matches follows the standard one-on-one best two-of-three format like most fighting games, but a match can last up to five rounds if there is no clear-cut winner in previous rounds (the game will end if both fighters lose the fifth round and no bonus points will be awarded if one wins the fifth round). In the single player mode, if the CPU uses the same character as the player, then the CPU-controlled character's name display will have a different name.

The home versions of the game were released for the Neo-Geo AES and the Neo-Geo CD. Both versions feature an option menu with a sound test allowing the player to play the game's music, sound effects and voices. The CD version adds a 2-player Versus Mode and a Survival Mode. The music is also slightly-arranged. The final boss Bai-Hu is also a playable character in the CD version.

An updated version of the game titled Breakers Revenge (ブレイカーズリベンジ) introduces one new character named Saizo and makes the final boss Bai-Hu into a playable character. Revenge makes adjustments to the existing cast of characters, rebalancing the game, the lifebars in this game were modified to look different compared to the first game's lifebars, and some stages' graphics were removed (e.g. flags in Sho Kamui's stage). However, the opening intro is almost identical to that of the first game and game's graphics are not that different.

The following plot summary is translated from the home versions' manual:

Somewhere in Hong Kong, two martial artists face each other in a vast courtyard. The challenger is a stout man in brown skin. The ground has been tainted with blood. However, his crescent blade has not touched his opponent yet. It was a one-sided battle. He was already exhausted and it will not be long before he would fall. "Fool, you will become one of my family" resounded the opponent's voice, as the challenger crumbled to the floor and was turned into sand.

The Fighting Instinct Tournament, or FIST, is a tournament as fierce as its name suggests. There was no shortage of martial artists who entered the tournament seeking fame, and yet there were many who left the tournament as corpses. The last challenger who remains in this lawless tournament gets to challenge the organizer of the tournament, the Head of the Huang Financial Clique, for the chance to win the massive prize money. The martial artist who can manage to defeat him will obtain the honor of truly calling him or herself the strongest. However, none of the martial artists who were chosen to challenge the champion in a private final match have ever come back alive. Nobody knows when exactly the tournament is held, since only an avaricious will was spiraling over there. The sponsor is actually an evil spirit who possessed the body of a modern man from Hong Kong who has established a selection system to amplify his dark powers. The FIST tournament has gathered numerous participants from around the globe and another sacrifice will be chosen this year.

During the single-player mode, instead of fighting a clone of their character, the player will face a differently named, differently colored alter-ego. Even though these alter-egos have different names and back-stories, they are otherwise palette-swaps of the regular characters.