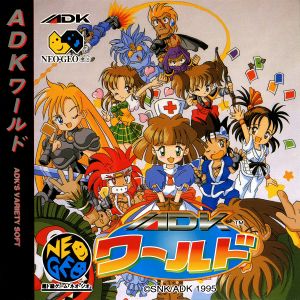 ADK World (ADK ワールド) is a fan disc with cameos from various ADK games, such as characters from World Heroes, Aggressors of Dark Kombat, Ninja Commando, and others. Similar to Neo Geo CD Special, the game is an omnibus game that features several types of mini games for its content. It was released on November 10, 1995 for the Neo Geo CD. The artwork in the game is either super-deformed or redrawn for people of all ages.

Players explore various buildings in ADK Town and each has their own event.