Nintendo Power shuts down after 24 years.

Gamers of a certain age likely remember the days when their main fix of information about new and upcoming video games came in the form of the monthly Nintendo Power magazine that was delivered directly to their mailbox. That experience is set to become yet another relic of a past era, as Ars Technica has learned that Future Publishing is planning to stop publishing the magazine.

Nintendo Power is one of the longest-running game magazines in the country, having been published continuously since the summer of 1988, when it started as a bi-monthly outgrowth of the previous Nintendo Fun Club newsletter. Nintendo produced and distributed the magazine (with articles that were often just thinly veiled marketing copy) from 1989 through late 2007, when it started contracting the brand out for a more independent angle from tech-and-game-focused Future Publishing.

But our source says that Nintendo, which was always "difficult to work with," was uninterested in renewing that contract or in taking part in a number of digital initiatives that Future saw as necessary for the long-term health of the brand. He added that Nintendo doesn't seem interested in taking over direct control of the magazine again (Nintendo and Future representatives did not immediately respond to a request for comment for this story).

Nintendo Power editors and staffers were told of the magazine's impending shuttering last week, the source said, and are currently being transitioned to work on other Future properties, including GamesRadar and MacLife magazine. The move should not affect Future's other gaming magazines, which include official periodicals for the PlayStation and Xbox brands, as well as Best Buy's @Gamer.

It's unclear exactly how many more issues of Nintendo Power are planned after the recently published August issue (its 281st), or how current subscribers will be compensated. Nintendo Power enjoys a total monthly readership of 475,000, according to Future press materials.

Nintendo Power's shuttering comes during a time of continuing struggles for the US magazine industry, which saw overall circulation numbers decline 10 percent in the first half of 2012. Gamers have increasingly come to rely on online sources for more timely and less space-limited gaming coverage, leading the venerable GamePro magazine to stop publishing late last year after 23 years in print.

There is at least one bright spot in the world of printed game magazines. Game Informer rose to become the third most popular magazine in the country this year, with nearly 6 million subscribers that were mostly gained through its point-of-sale relationship with mega-retailer GameStop.
Click to expand...

End of an era indeed. Such fun times back in the day hunched over an SMB3 guide & cheating at the memory card game.

And all those awesome hand-stitched level maps...
But I guess that era's been dead a long time now.

Remember when it was called NINTENDO FUN CLUB NEWS. 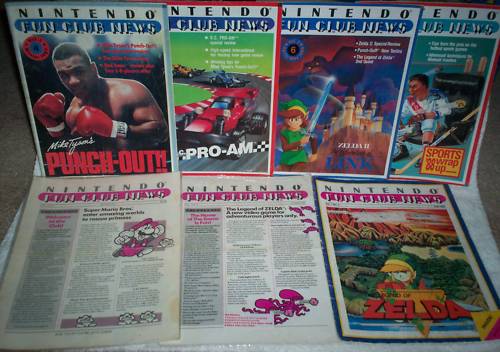 I can appreciate nostalgia, but it was always a pretty terrible magazine unless you were 7 years old or younger.
9

This is the hand that launched a thousand batches.

Of all the video game magazines, I thought that Nintendo Power would be around for ever. I can't believe Nintendo's apathy. Man, print is a dying industry and it must be difficult to turn a profit. I used to subscribe to Nintendo Power and EGM at one point, now I just buy the odd magazine, usually Retro Gamer. I have many old magazines in storage.

As a kid, having these magazines was the next best thing to owning the games. The covers were so cool. I remember reading them front to back and even drawing the images in them. Shit, thanks for the memories Nintendo Power, I will be sure to buy the last issue.

SouthtownKid said:
I can appreciate nostalgia, but it was always a pretty terrible magazine unless you were 7 years old or younger.
Click to expand...

Maybe fandom clouded my judgement, but I thought they really hit their stride during the SNES to N64 years.

these books will shoot up in price in about 5 years

This is horrible. My son still has a subscription. I was already subscribed when the first issue came out. My first issue was the last issue of nintendo fun club news. then my second issue was the premiere of Nintendo power.

I remember getting the 1st issue of Nintendo power. I was a huge 8 bit NES fan and Nintendo Power was like the bible to NES gamers.

broken said:
I remember getting the 1st issue of Nintendo power. I was a huge 8 bit NES fan and Nintendo Power was like the bible to NES gamers.

the clay smb2. a classic.

Well, there goes my lunch time reading material. I hope they offer a straight refund for the rest of my sub, I'm not interested in any other magazines.

i'm still pissed at my mom to. i had every single issue of nintendo fun club and nintendo power up until around 94/95. we had moved & she felt they were useless junk and threw them all away. i didn't find out until after we moved.

I still remember going over my neighbor's house and at the time his uncle and his wife lived there and on their table I saw the first issue of it. I asked what it was and he told me him and his wife were in the Fun Club and the magazine was brand new. He gave me one of the subscription cards and it was in the mailbox the very next day and a few weeks later I got the first issue and was a loyal subscriber till the Game Cube days. As others have said when you were a kid the thing was like a bi-monthly bible that was shipped to your house and you read the damn thing cover to cover. But as you got older and interested in other systems the shine quickly wore off.

I'm not sure how many issues I have left. I had pretty much all of them along with the power guides that you'd get for renewing the magazine. (I never bothered with the free copy of Dragon Quest) I only have one of the "newer" issues because it's got Sonic The Hedgehog on the cover for the release of Sonic Adventure on the Game Cube. I never thought I'd see the day that Sonic would be on the cover of a Nintendo Power. Nintendo almost went out of their way to make it like Sega, NEC and Atari didn't exist. (Which is why you subscribed to GameFan and EGM)
M

It was a good magazine when I was a kid and gaming was much smaller. As recent as when the Wii came out I tried to look at it again and it was not the same. I am sure it is due to a few things and one is that not many people are willing to pay for "gaming news/cheats" when you can look it up online.

Good memories. I absolutely treasured the free Dragon Warrior guide that came with one of the early issues. I also lived for the preview section. I probably would've never played what is now my favorite NES game Shadowgate had I not seen the screenshots in an issue of Nintendo Power.

Not that he had anything to do with it, but I fucking hate reggie fils aime. Nintendo needs Howard back in a big way.

Nintendo Power is (presumably) only a US mag? We have the 'Official Nintendo Magazine' here in the UK. Do you guys have that too, as well as the now defunct NPower?

NeoGeoNinja said:
Nintendo Power is (presumably) only a US mag? We have the 'Official Nintendo Magazine' here in the UK. Do you guys have that too, as well as the now defunct NPower?
Click to expand...

My best video game memories always included getting the free Dragon Warrior package and the four original strategy guides (Game Atlas, Mario Mania, etc). I still have around 30 of my original magazines, and once in a while will flip through one on the can to bring back some nostalgia. Nothing like reading about Super Contra IV or another similar upcoming 16-bit sequel.

I stopped reading after issue 120 or so, the homerism was just too much. Still, those early days, along with GamePro and EGM, will always remain golden.

RIP to a legend. I still have at least the first 1-4 years of NP up in storage...I enjoy busting them out for a read from time to time...

Your trolling seems to continue rising in quality, LoneSage.

So how long until we can get the entire archive in PDF format?

It was a cool magazine to have growing up, if only for the hints/cheats/walkthroughs, but the internet rendered it obsolete and I stopped buying it around 2000 or so.

That bitchin' strategy guide they did for Final Fantasy was amazing, and I still own it.