Anyone seen or heard about this candy cab? 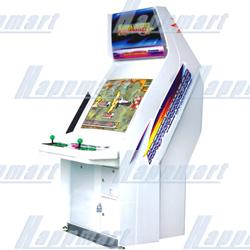 interesting, never seen that before...

Yep, Its a Blast City clone. I think they had some for sale on ebay about a year and a half ago. Here is a thread by beaglepuss about the same one I believe.


andy251203 said:
Lemme chime in about these cabinets one more time...

I'm good friends with the seller, and he gave me the opportunity to "dissect" one of these cabinets that had been damaged in shipping. Basically it was knocked around like being in a blender, and suffered some structural damage. The owner decided to part it out, and I got to do the honors.

As I was taking it apart, I noticed that the entire cabinet is made out of plastic, with the exception of small metal bits and pieces. Apparently the Chinese have a shortage of metal, so they use plastic for everything. There's also a few things that would piss off the FCC. There's no EMI filter and no isolation transformer. The monitor chassis is made to plug straight into the wall. Obviously nothing is grounded since the cabinet is plastic.

One good thing is that the control panel is shaped like a standard sega panel, so you can drop in any naomi cp, astro, blast city, etc.

The best part of the cabinet is the monitor. The 29" new versus city knockoff has a flat tube, which looks really good. It needed some color adjustment out of the box, but it was no big deal. I would probably cap kit it in about 6 months, because of the lack of reliability that chinese caps have.

IMO, for $1000 shipped, it's not a bad at all for a home use, plug and play cabinet solution. I would have some qualms about using it in a real arcade, however.
Click to expand...

Hard candy has several that are similar (clones of the Blast or Vs City), like this Storm City