SNK took a big risk when the started the Samurai Shodown III Project. The team responsible for the popular and critically acclaimed Samurai Shodowns 1 & 2 was no longer around and a third installment was highly anticipated, if not expected. Under these circumstances, SNK gave the project to a new team, the Garapagos Team (continuing the time honored tradition of mangled SNK English, the new team misspelled their own name...based on the Galapagos Islands). The new team decided to revamp the game and bring the storied series into a new age. Indeed, as the game hits you with a new feeling from the start: hair-raising Kabuki cries greet you as sharp text fills the screen:

To Have No Fear, To Slice and Die! To Survive! 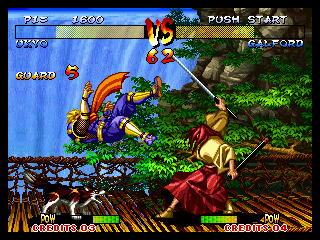 A dozen dramatic anime caricatures dart over the screen and you begin to see there is a much more dark and serious tone to this installment. But did these programmers know what to do with the powerful game they had been given? This has been hotly debated among Neo-players around the world. Some claim the game is a worthy title in the series while others call it a misstep that was corrected in part four. In all of these arguments, one thing is apparent: Of the four games in the fighter series, 3 is the least cited as a personal favorite. Why? Follow my review and make your own judgments.

The sub-title for SS3 is "Blades of Blood." Zankuro, an evil demon samurai, has arisen to wreak havoc. It is up to your character to stop him (and fulfill some character specific goal). The premise for SS3 seems to be much more thematic than story driven. As mentioned above, the new team strove to create a much more serious fighting game. One of the major new themes introduced to the series is the ability to choose your character's moral alignment (which is described on the box and documentation as "Chivalry" and "Treachery" but inexplicably changed in the game to the ineffectual "Slash" and "Bust," respectively). These alignments not only change the characters color, but also their demeanor and moves! Therefore each character now has two different versions to master, a real plus in terms of replay ingenuity. Other than slash & bust, the new serious Samurai has serious premise issues in terms of fan appreciation. Gone are many of the fun and funny fan favorites (Genjuro, Earthquake, Wan-Fu, Caffeine Nicotine, Charlotte, Jubei, and Tam-Tam/Cham-Cham among others), and in their place we find a few decidedly darker (and rather vague) characters to go with the more serious theme. I think the programmers made a serious mistake with this change. First, they showed no consideration to the legions of fans that used the many deleted characters (in stark contrast to the Fatal Fury team which brought back older characters by request); secondly, the new characters are not nearly as appealing or enjoyable -particularly because of major weaknesses in the story department. Finally, for some reason, the story in SS3 seems rushed and tacked on at the last second to match the new theme created by the new team.

The graphics in SS3 are lush but unrefined. The game has been given a face lift, making the characters bigger, better animated, and giving them a darker edge. With that said, it feels as though the graphics could have been tweaked a bit more (it looks like the game was released a few weeks too early). While the graphics are nice, the colors and lines seem unrestrained in comparison to the other three games. I really feel that the programmers were on to something, and if given another few weeks, could have released a beautiful gem. What we have here is a glimpse at possible greatness: Nice and frustrating at the same time.

Music has a powerful effect on the theme of a game, and the Garapagos Team is fully aware of that fact. The somewhat perky themes of some of the characters have been replaced by serious, traditional Japanese tunes that are appropriate for the feel of the game. The sound effects are all well done, although the game seems weak in meshing the different SFX together (surprising, considering the multi-channel sound capabilities of the Neo Geo). Much like the graphics, the music feels rushed and in need of more tinkering. Good, but room for technical improvement.

This is where the game has dramatically changed. The new programmers have reconfigured the buttons to have three slash buttons and one kick instead of the old three slashes and three kicks (apparently to emphasize the use of the weapons, which makes sense and works quite well). In addition, moves can now create major damage (some fierce attacks can eliminate 60% of the bar at once!!!), which creates a playability issue: Matches are either too brief or too long. Many matches are decided by 10 attacks or less. With slow recovery times, over-powerful double hits, and even more powerful counters, matches either blow by or are sitting matches. There will be many times where you will be shocked by the sudden ending of a match (They corrected this in part four by doubling the length of the life bar). This kind of uneven pace makes the game quite frustrating at times. The AI is quite relentless (even on Beginner) and with such short matches you often have to play/watch many, many matches in order to establish a strategy. The final boss, Zankuro, is a fine addition to the SNK tradition of insanely difficult bosses. As an added infuriation, once you beat him in the traditional 2-win bout, you must play a final climatic (and even more difficult round) to beat the game (so you essentially have to beat him three time). Again, with the short life bars, matches against Zankuro are usually very quick or painfully long. On a positive note, the addition of character alignments does add replay value to the game, should someone want to struggle though the matches again and again. I'm certain this could have all been taken care of with better play-testing.

I believe the Samurai Shodown series was lucky to survive part 3. While the game isn't terrible, its rushed qualities make it the black sheep of the series. I was relieved to see all of the flaws above fixed in part 4 (which should've been titled "Dear Fans, Sorry about Part 3..."). Unlike the other three, I really don't enjoy playing SS3. Not only is the darker theme out of place, but its a yawner without any interesting story to back it. As a final stab in the heart of gamers, SS3 dumps the cutesy pseudo-movie ending of the prior two and switches to a cold, text-only ending. Now if that isn't the sign of a rush job (they corrected that on part four), then I don't know what is. After beating as vicious and cheap a boss as Zankuro, you expect to see something more rewarding, more impressive than... text. This game is good, but if you're looking at the Samurai Series, you could do better... A lot better.