A sequel to Double Dragon?  Yes, you heard right. A company named Evoga has decided to make a so called sequel to the old school fighter. It is very strange that this is being called a sequel to DD since not many characters make a returned appearance and the game could have been its own title all together. In fact the only ones that do are brothers Billy and Jimmy along with Abobo -even then Abobo has been renamed to Abubo for some odd reason. All the rest are new comers but fit in with Billy and Jimmy in a charming way. [Editors Note: Evoga could not get the rights to use the Double Dragon characters, so they came up with original names and story.]

This is where this game really shines and at the same time falls flat on its face. The character animation is pretty crisp and colorful while the characters palettes are well balanced and give them an anime style look. If you need an idea of how good it actually is think one step down from Garou: Mark of the Wolves and one step above KOF. The background art, however, is another story.  It stinks!  Its not intolerable but its still too bland.  Some of the stages caught my eye, such as Billys and Pepes, but the rest are too tame and don't seem to take advantage of the Neo Geo's palette.  One example is in the rave/bar where one side of the room is, in fact, just a reversed mirror of the other side. Im not kidding. It almost seems that the creators made the stages lame on purpose to make you more interested in the character art.  Overall the graphics are average but they could have been better if more time had been put into the backgrounds. 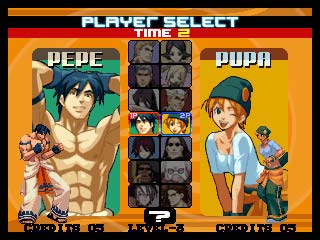 Something that really rocks with this game: This is one of the few Neo Geo games that lets you tag in mid battle with another partner. The only other game I know of is Kizuna Encounter but that seems like ages ago. A tag bar is also incorporated to keep players from constantly switching back and forth which is totally abused and annoying in games like Marvel vs. Capcom.

Another new feature is the first impact attack. By pressing strong kick with strong punch a slow attack is performed that if connected will send the other player into a stunned state where you have limited time to perform the displayed button commands. After the combo you can follow up with other combos which can go on for ever if you are good. (The highest combo I ever got was something like 65 but I know its possible to do better.) Also, pressing strong punch and kick after you block an attack uses one power stock and counters an opponent's move. This is very useful if a player performs a super so you can break the move before it even begins.  Your environment also plays a crucial role in how well you do. By knocking a player down near an obstacle they will bounce off of it and are set to be juggled again. If the obstacle is destroyed the arena is widened and the players have more room to groove.  Along with these are other cool features such as super meters that if charged can rack up to 3 power levels which can be used to perform super attacks and super special attacks, one being just a more powerful version of the other.

Players also have the ability to evade and role using the two weak buttons along with directions on the joystick. You can also surrender to your opponent by pressing all 4 buttons and holding them. This may sound dumb but the one surviving fighter gets up to 2 extra power stocks and the defeated fighters health. Other minor gameplay extras are included such as taunting and countering throws, overall the gameplay, in my opinion, is the best part of the game and is a ball if played with friends. 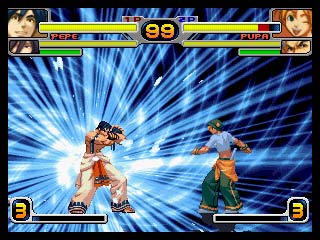 This is the second best aspect of ROTD. The tunes consist of heavy metal funk, techno, and guitar. The best track is in Kang and Jones's stage where the music starts out as a funky, 1970's kung-pow TV series theme and escalates to a steady rhythmic beat. DIG IT MAN! At first impression most of the music does seem a little corny but grows on you as you become more immersed into the game and discover that it does indeed provoke that extra UMPH. The sound effects could have been better since most of the time it sounds like its coming from a radio thats picking up a lot of static. Overall the music is great (What would you expect from Noise Factory?) and the sound is amusing -you might even find yourself humming a tune or two during the day.

Unlike most KOF games, ROTD has multiple endings, but you have to play as the default teams to get all of them. There is also one generic ending for mixed teams and a special one if you use the brothers Jimmy and Billy. The endings feature well drawn and detailed character stills that explain the fighters motives and resolutions in the tale of the Rage of the Dragons.  This idea of multiple endings motivated me to master all the teams but in console mode you can view them for free which does detract from the replayability.

This part of the game really needed work. At first the AI will clobber you until you get the hang of their moves and when to counter. Once you discover that, it gets pretty easy even on the hardest difficulty level. The computer seemed to be a sucker for low strong kicks and performed set patterns over and over that became too predictable. I've heard many complaints that Abubo and Johan the bosses are extremely cheap (and yes they are) but like most neo-geo bosses they have weaknesses.

To sum up the AI: Make the regular fighters harder and the bosses less cheap but smarter.

ROTD is an above average game it's good but a little short of greatness. If Evoga had let it cook a bit longer it could have been perfect.