Well here we are. Summer 2002, and Metal Slug 4 has just been released on home cart by those lovely people at Sun Amusement. This is now the fifth title in the Metal Slug series, and the first time a Metal Slug game has been programmed outside of SNK  by Korean developer Mega Enterprise.

MS4 is probably the most controversial Neo-Geo release there has been in the consoles 12-year history; dividing opinion on what this release has to offer and how it compares to its much loved predecessors. Hopefully, this review will portray an honest and unbiased view of what MS4 really can, and cannot offer. The first game in the series was awesome, but the benchmark for me truly has to be MSX  definitely the best all-round Slug yet.

So whats new pussycat? Not a lot to be honest, but lets take things a step at a time. The first thing youll notice about MS4 is the character line-up. Eri and Tarma are pushed back to cameo roles and new characters Trevor and Nadia are brought in for you to select, alongside Marco and Fio. The two new characters are well presented and a welcome addition to the series, but at this stage it probably would have been better to have all six characters selectable to play in game. This is a minor grumble though and doesnt detract from the game.

One of the key elements of Slugs past has been the weapon power-ups available to you. Again these are largely gained through rescuing the bearded POWs, but the only new weapon Ive found is the twin Uzis  very cool, but are few and far between to be found. All the regular weapons since MSX are included  Iron Lizard, Super Grenade, Laser, Enemy Chaser etc, etc. The extra bombs are still limited to Grenade and Firebomb, but Stone also appears for the first time since MSX. However, gone are Rain Cloud, Satellite and our little monkey friend with the Uzi  all from MS3.

Okay, so little or no additions in the weapons department... What about the Slugs? To many, this is what the games are all about  jumping into a Slug and destroying everything in your path! However, here the game proves most disappointing, especially after the selection available in MS3. Gone are the Marin Slug, Slug Flyer, Drill Slug, Ostrich Slug, Camel Slug, Chopper Slug, and the Gold Metal Slug. Ever present of course is the standard silver Metal Slug, and joining it is a forklift truck. No, that isnt a typo; a forklift is, honestly, one of vehicles you can commandeer. The other vehicles include several enemy units like the Metal Crow and Rocket Launcher and a rather odd robot thingy, which almost resembles the mutants from Mission 5 of MS2/X. The only other Slug that heralds from previous episodes is the Slug Walker.

One new addition is monkey mode and this adds a lot of amusement to the proceedings  but at a cost. The often hilarious big mode has been scrapped, and along with it, the excellent animations and touches showcased in MS3 for your fat friend. Monkey mode is good, and its different, but it doesnt appear often enough, and is almost a throw away gag.

Down to the action then: I dont want to give too much away, as the game is limited enough, so Ill keep this brief. MS4 is very much a return to the style of the first Slug  lots of soldiers, tanks and helicopters. The mummies make a return at one point, as do several other non-human opponents, but nothing to the extent of 2, X and 3. Bosses are well drawn and animated, and generally different to what weve seen before, but dont offer anything terribly exciting to talk about. The action at times can be relentless, with enemies pouring into the screen from all angles. However, this soon becomes quite repetitive and you find yourself not really caring as your character gets swamped. 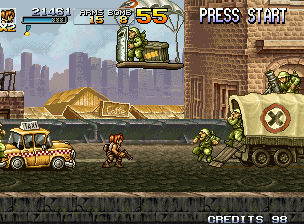 The first two Missions are ripped straight from previous Slugs, but the later Missions are new, are very well drawn, but offer little or no background action. Also your destructive influence is very limited. There are no buildings, walls, bunkers or cliffs for you to destroy here. A few cars on the first level, and then youre restricted to the odd crate that might get in your way for the rest of the game.

There are no real surprises to find, monkey mode is mentioned in the manual, and you certainly wont find anything as original as the Elephant Slug hidden away amongst the Missions.

The graphics are standard Metal Slug quality, with very few new animations, and certainly nothing to match the details and quirks of MSX.

The sound is, again, the usual fare. The music is all new, and largely very good, but some of the traditional Metal Slug military themes are missing as I guess the developers wanted to break new ground.

Compared with the previous Slugs, MS4 is well put together -the Korean developers have obviously tried to inject new life into a tried and tested formula, and have done so with some success. MS4 is a competent package and the overall presentation does not in any way blot the history laid down by its predecessors, but it is limited.

Overall, MS4 is something of a Curates Egg, and upon serious reflection I dont think we could expect anything better than what weve got. After MS3 it was always going to be difficult to try and offer something new to MS fans, but Mega Enterprises have done a commendable job of a difficult task. Metal Slug 4 is the weakest game in the series, but that does not make it a bad a game; theres certainly plenty to come back to and it will be a while before you complete all the games secrets and paths. Just dont expect the experience to last as long as the previous MS games. My advice is strongly try before you buy. I hope there is a fifth incarnation of Metal Slug, and that Mega Enterprise will treat this game as a learning experience for greater things to come