First of all, let me say I've been a fighting game, Neo Geo and KOF freak since the very beginning. I've been playing each SNK fighting game (KOF on top) since they originally came out in arcades.  I'm into the KOF storyline and tradition as well, also 'studying' the SNK original Japanese books and Japanese cultural involvement.   So, please expect some hype in what here follows. ^_^

I've been playing KOF2001 at the arcade for some days, both single playing (against CPU) and versus. I've also finished the game with a couple of teams, beating the bosses and all.

So lets' talk about it:

A) Art and all-around layout.

I say it's fair-good.  While most people are complaining about the in-game art, I'm not at all.  Some drawings are really 'weird', I agree, but it's intended to be unique -Very different from the anime-looking style of KOF 2000, this one looks more 'hand-draw' in my opinion.  Sometimes its really good (Kyo, K', Kula, K9999), sometimes really bad (Clark, Goro, Yuri).  We have different portraits for the select screen (face only) and victory screens (half body), but for some strange reason what looks bad in the former also looks bad in the latter, as if the artist intentionally made some character look weird... maybe to punish them? ^_^

The intro is very cool -It's Interesting with some story in it (K9999's 'birth', K' new teaming) and a good rhythm -though not as good as 2000 or '96, which are the best ones IMHO. The select screen is somewhat plain, but it works. It reminds me a bit of the selection screen in Garou MotW: with two plain square for big face drawing on top, but there isn't the same level of pixelation. Another MotW similarity comes in the little 'intros' for each match, where tidbits of the backgrounds are edited to introduce the fighting location. Actually this seems to be a mix between the styles used in Garou and KOF97. The on-screen layout during battle is really good too.  Surprisingly, you can't see any fighter name during the fighting, only graphical elements are displayed. This may sound a little odd, but after a few minutes you'll realize those names were nothing necessary, and the all-around look of the screen is better with just the little faces of the fighters involved. The time counter is also extra cool this year, if you ever wondered about that. ^_^

As for the power gauge, it's uses the same 'nice plain' look as the intro screen -I'll describe it better when discussing the new super/striker system in the game.

Very good. Maybe the best in the series as for the sprites. This year it seems the colour palette as been 'darkened' a little, and I really love it. All the new characters are nice and smoothly animated. Old character got some more animation too, and that's good for sure.  What is bad here? Some of the characters introduced in KOF2k are still as undersized as they were (Kula, Hinako), especially if compared with '98 sprites (especially Yuri). We got some '98 rips too, Goro and Heidern -the latter re-painted at least to his green uniform (which I prefer).  Xian-Fei is a 99 rip (d'oh) and as you may have heard, Andy has a new 'winter' outfit, which is pretty lame IMHO, while Athena's new look is far better that 2000 (again, IMO). Now the  new characters, they really have to be seen!   Particularly K9999 and May-Lee, they're superb in my opinion.  Also Angel and Foxy are really good, and you already introduced Kula who is now a standard character (not a secret character). The same can be said for the bosses (two plus three extra strikers for the first one) which are awesome. Some of the characters got new victory and entry animations (poses) which are sweet indeed.  For example, Terry has a victory where he poses as in MotW saying 'Stand up!' together with a little Rock Howard... just TOO CUTE!  Kula has plenty of different entries, the one with ex-Nest characters (K', Maxima) is fantastic and another with Foxy that's even better.  Lin now has even more cool attitude than before.  Ramon has special entry animation and winning pose with his beloved Vanessa. Again, I say, must see!

The backgrounds are, well, fair-good.
I love the style they're designed, with the 'actual tournament style' which we saw in 96/97.  In terms of realism, there are some really nice, some so-and-so, and a lame one (the GranPrix stage). Overall good indeed.

Music was hard to hear in the arcade I played it at. Still, my impression is 2001 sports no real specific tunes but just some generic 'beat-based' techno for the fighting. An interesting idea, IMHO -It seems to work quite well as build up 'rhythm' for the fighting and no more.

Here is a point where 2001 shines as the top of the whole series. This year's speech is extra long, extra cool, and extra crisp! Some of the best voice actors from the anime scene collaborated this year and you can hear it for sure.  Igniz, the final boss, is dubbed by the famous and great Norio Wakamoto.  K9999 is Nozomu Sasaki (Tetsuo from Akira), just to make him even a more clear homage to Otomo's masterpiece.  May-Lee uses Mîna Tominaga (Noa Izumi from Patlabor), to power up her 'sentai' (Japanese live action super heroes) appeal and look. A lot of characters have newly recorded voices with their famous actors like K' (Yuki Matsuda at his best!), Kyo (Masahiro Nonaka goes deeper and deeper with his voice), Iori (y'know), and others.  Sound effects are cool and crisp -just as you can imagine it.   Enough said.

GREAT, GREAT, GREAT!
First of all, the ability to choose the number of your strikers and fighters is a great addition. It manages to give the fights even more variety than before, and is very well balanced when talking about the damage system. Also, this new 'ratio-like' system integrates perfectly with the whole power bar system. As you know, there's just one power bar now for both strikers and supers. The length of the bar, as well as the number of power stock you can, err, stock depends of the number of strikers you have selected. The more the strikers, the shorter the bar and the higher the number of the power storable too. While the whole thing may sound a little tricky, in reality its very simple to get: very functional and very intuitive. The easy and good-looking interface helps a lot. This system is a work of pure genius IMHO.  Out are Counter and Armor modes, and I don't miss them at all. MAXed supers now cost 2 power stock (you CAN'T have that if you play with a no-striker team, while you can have up to FOUR power stock in a three-strikers team). The 'wire' system (say the character bouncing on 'walls' for juggling) has to be seen in the new 'combo-like' system of the whole game -yes, KOF2001 is very combo-based. Delay times for all moves has been reduced to nothing, so 'entering' with a single hit is very hard. A plain hit must become a combo starter. You can easy chain combo, two-in-one, and super cancel.  It's hard to master.  I don't like combo fighting that much, but the system works great.  Also, while you can now call up to 3 strikers almost together, the striker system as be re-balanced to not be as over-powerful as in 2000 -it needs much more skill.   Go for it.

GOOD! GOOD! GOOD!
All the new characters are very interesting and fun to play. Since '99 SNK has tried to develop new playability with the new faces; KOF 2000 followed the trend, and same is 2001!

As you know, Jhun and Kasumi are out... I miss them very much! Why not to kill stupid Hinako instead? ^_^

Just as Eolith promised, the game has a very strong storyline! All the teams make sense now (unlike previous years), and the character roster is not only the largest, but one of the best in the whole series (rivaling with 96 and 97). We have a lot of special intros and couplings on characters, special speech... you know.  I love that stuff.  All goes smooth in the story mode through the super cool bosses, which integrates well with the story. The endings are great and also point out some story bits for 2002!  Eh, eh... Nest is dead, but expect Chinese legends, ninjas clans, and psychic power to be the main things next year! Unfortunately, the staff roll is not nearly as cool as was in 2000, sigh... 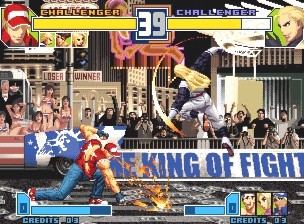 Kula vs Ex-Nest Special Entry: Diana and Foxy appear, cross their rapiers over the little girl and shout 'Yabou no tameni' = 'for the ambition', while Kula's hair turn blue, ready for battle.

Kula vs Foxy Special Entry: Kula appears in a Santa Claus like coat, licking a lollypop as the little girl she is. Diana appear near Foxy and whispers into her ear 'be easy on the little one', then Diana dashes off-screen taking Kula's coat and lollypop away.

K' vs K9999: they both special taunt each other with extra-cool attitude.

Ramon vs Vanessa Intro: Ramon appears with a very excited expression, with his hands on face, and a little heart come out of his face while he shouts 'Vanessa, as I know you're really beautiful!'

Ramon vs Vanessa Win: Ramon goes near the beaten Vanessa, down on his knees as a gentleman and declares 'Miss Vanessa, would you marry me?'

Andy vs Mai Intro: Mai present a little baby to Andy, who's scared to hell. The baby starts to walk toward her 'father' but turn to be just a ninja trick.

Kyo vs Iori Intro: SUPER COOL - both fighter appear in the middle of the screen, shoulder to shoulder.  Kyo raises his head and asks 'Temee no hono ga nanin iru da?' (what colour are your flames?), Iori turn his head to him and replies 'Ita non koto wa soredake ka? Naraba...' (this is all you have to ask? Then...) at that point both hurl their flames at each other and the resulting explosion repels the fighters leading them to the start  places. Note that the speech here is a homage to a famous Hokuto no Ken (Fist of the North Star) dialogue 'What colour is your blood' etc...

KOF2001 is just an awesome game! Very different from the previous (and not so good) one and is very rich: full of thing to be played, seen, enjoyed, mastered. SNK and Eolith have done a supreme work creating a the eighth game in a series which is never boring or 'old'.

This is the best fighter ever made.

Shito: Is a native of Italy.

by Toxic - Courtesy of Kazuya's