I need a little help from someone that has a Japanese R-type board. I would like to verify the values of a few of the caps around the amp. 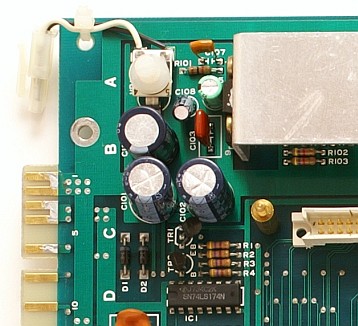 Apparently there are two versions of the R-Type hardware. The American version licensed by Nintendo was not set up to use the on board amp to produce amplified sound to the JAMMA edge.

Below you will see an American version of R-Type that is missing Caps at C101, C102 and C108 positions.

Can someone that has the Japanese version verify what caps are needed at those three positions?

I have 5 M72 Japanese boards, including an original R-Type. They all use these same caps.

Fantastic! You are the best! So do you have Ninja Spirit?

No, but I have an X-Mulitply with a Ninja Spirit pcb seal on it...

I did not know you could do that, I thought different games required different PALs even on the same hardware....
Last edited: Dec 8, 2010

Testocules said:
I did not know you could do that, I thought different games required different PALs even on the same hardware....
Click to expand...

On some Irem boards the PALs don't even do anything. I think someone had one and removed the PAL and nothing different happened, pretty weird.
N