Meltzer reporting that Punk threw the first punch backstage and possibly really fucked up his bicep, shoulder, and/or pec

Specific details have emerged regarding the reported altercation between CM Punk and The Elite after Punk’s appearance at the All Out post-PPV media scrum on Sunday night.

Kenny Omega and The Young Bucks confronted Punk in his locker room after his barrage of allegations and insults aimed at “the EVPs” in general and Hangman Page by name. He accused them of leaking stories to the wrestling media accusing him of being instrument in Colt Cabana being moved from the AEW roster to the ROH roster. He criticized Hangman Page for turning away advice and making comments about him that he said undercut a money match they were building.

A PWInsider report said that the altercation was mainly between Punk and The Bucks. A The Wrestling Observer report said that Punk was the one to throw the first punch at Matt Jackson. Ace Steel, who had been featured at All Out as Punk’s longtime friend and indy wrestling cohort, was involved in the incident. Ace reportedly threw a chair, which hit Nick Jackson, and bit Kenny Omega. Steel was working as a backstage agent for AEW.

AEW security and staff broke up the fight. AEW has not made an official company statement about the incident or Punk’s comments at the All Out media presser.

PWTorch first reported yesterday that one of the reasons AEW officials are not commenting is because there could be legal ramifications from the fight. People in the company tell PWTorch that people are shaken up over what happened and believe the fallout could be significant in terms of suspensions, firings, and new edicts on public comments wrestler make.

CM Punk won the AEW World Championship from Jon Moxley in the main event of the All Out PPV. After the match, MJF made his return to the company, his first appearance since the post-Double or Nothing episode of Dynamite. Earlier in the show, Kenny Omega & The Young Bucks became the first ever AEW World Trios Champions, defeating Dark Order in the finals of the Trios Championship Tournament.

One can only hope he put himself on the shelf again

herb said:
One can only hope he put himself on the shelf again
Click to expand...

Now it sounds like he may have actually hurt himself in the match itself and not the locker room fight afterwards.

Either way though, he's hurt. Not sure if it's a minor or major injury.

Kenny Omega, the Young Bucks, Brandon Cutler, Michael Nakazawa, and Pat Buck have all been suspended by AEW.

Ace Steel and CM Punk are both suspended at a minimum and Tony Khan will decide later today whether to fire them completely.

famicommander said:
Kenny Omega, the Young Bucks, Brandon Cutler, Michael Nakazawa, and Pat Buck have all been suspended by AEW.

Ace Steel and CM Punk are both suspended at a minimum and Tony Khan will decide later today whether to fire them completely.
Click to expand...

Working themselves into a shoot

According to a new report from Fightful, the AEW EVPs and wrestlers The Young Bucks (Matt & Nick Jackson) kicked down C.M. Punk’s door to enter his locker room.

Fightful noted in this report that they were reporting on Punk and AEW agent Ace Steel’s side of the story and this version of what happened in the locker room fight comes from people close to Punk and Steel.

The report states that after Punk appeared on the Scrum, the Bucks allegedly approached Punk’s locker room and pounded on the door. After Punk didn’t answer, they went on to kick down Punk’s door to get into his locker room.

Steel’s wife was reportedly in the room and Steel told people that’s what set him off. Steel threw chairs and ended up biting AEW EVP Kenny Omega, who was also entered the room. The report states that one of the chairs connected with Nick Jackson’s eye.

Yeah, apparently Punk managed to get himself hurt in the actual match, likely bad enough that he would have had to drop the title anyway even if he wasn't about to be suspended or fired. I know he's never been afraid to say what he thinks, but he might have been especially likely to nuke those bridges if he already knew he was going to be away for a while or for good, as sounds more likely now (sounds like the answer is going to be that he's now injured and will end up "retiring" due to injuries instead of ever coming back).

Sounds like it's going to be Moxley vs. Jericho for the vacant title tonight, since both were originally supposed to have the night off but are now reported to be working. I assume that Tony will make that announcement and then MJF will argue that his chip means he can schedule his match for whenever he wants, so it's against the winner immediately after, (or something along those lines, likening it to the MitB briefcase would be a good callback to all his WWE rants), and he'll end up with the belt at the end of the show.

Also, side-note- Punk wasn't a good MMA fighter, but he is a genuine Duke Roufus-trained MMA fighter and a long-time BJJ player. I don't know if either of the Jacksons could win a fight against Riho.

edit: Meltzer says Megha Parekh saw the brawl as it happened. Lol no wonder they're completely worried about legal liability. It sounds comical, but knowing how the Bucks and Omega tend to operate, I could totally see them doing like Jim Cornette suggested they would and claiming that having Punk around creates an unsafe work environment and liability for TK/the company.

Edit again, lol at that intro with zero explanation fear of litigation will do that I guess. So MJF gets the belt in two weeks instead but my basic ideas are the same. I think Punk and all three EVPs are done, only way to salvage the rest of the locker room.
Last edited: Sep 7, 2022

Those upcoming event graphics sure look a bit sparse w no Punk, Bucks, Omega, or Rosa.

I wonder if they'll change the Fight Forever cover art?

Maybe now the women's division won't suck quite so bad with someone who's not retarded booking it. Move Deeb and/or Rayne to the office let them have at it and there's no way it wouldn't get better.
Last edited: Sep 7, 2022

Mox really is their ace. Him vs mjf should be great. I'm intrigued to see how everything plays out over the next few weeks. I'm only bummed about Omega possibly being let go as I enjoy his in ring work a lot.

It doesn't look like anybody is fired. Seems they all just got suspended.

They should all get canned and join Control Your Narrative.
2

I can't imagine the Young Bucks kicking down a door of any sort. That also includes pet doors.

2Heed said:
I can't imagine the Young Bucks kicking down a door of any sort. That also includes pet doors.
Click to expand...

That was Punk's version. Here is the Elite's version: 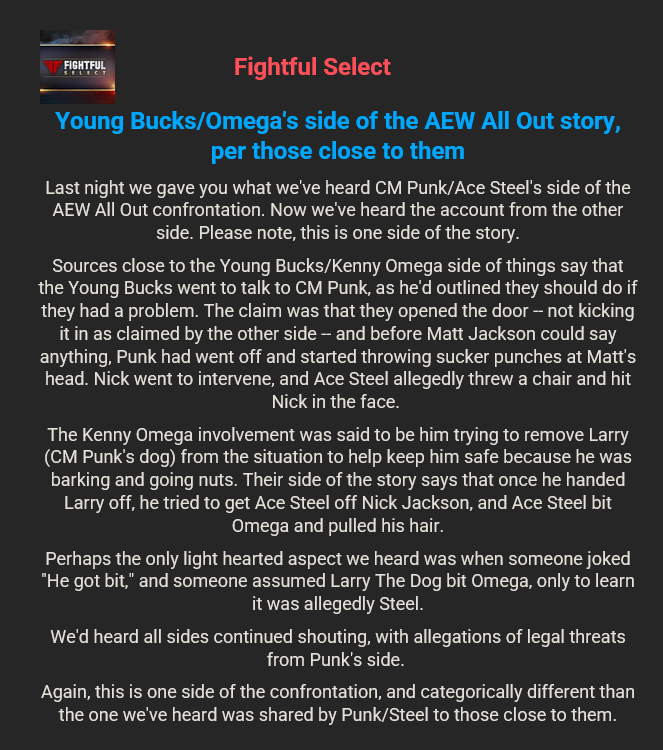 AEW's top lawyer and VP was there to see it all so I'm sure the real truth will eventually get out.

Meltzer now saying Punk is out 6-8 months due to the injury, so that makes any suspension pretty much irrelevant

Christian Cage out with the same injury, 6-9 months.

Both sides and every version is that Punk threw the first punch, that a fight broke out, and that Guy [Ace Steel] hit Nick Jackson in the eye with a chair very hard and bit Omega and pulled his hair. The motivations from the Punk side were that he believed a fight was going to happen and punches would be thrown so he beat them to the inevitable punch that the claim is Matt Jackson was going to throw. Those close to the other side labeled it as a sucker punch. From the Steel standpoint it was about protecting his wife, who had a broken foot and was in the room, although escalating the fight and using a weapon has to be questioned for a producer with that in mind with his wife in the room..

It is known that Chief Legal Officer Megha Parekh was not only a witness to what happened but came to the room with the Young Bucks, likely with the idea that with her there, it would keep things professional. Obviously that didn't happen.
Click to expand...

The fact that the Bucks brought the company's top lawyer to the room with them sort of discounts the idea that they came to fight. If you're going to go punch your coworker you don't go get your boss to watch.


The fact that the Bucks brought the company's top lawyer to the room with them sort of discounts the idea that they came to fight. If you're going to go punch your coworker you don't go get your boss to watch.
Click to expand...

Bucks and Kenny should basically be fired as EVPs and just get regular talent contracts, no business worth a damn lets their corporate brass get caught fighting with arguably their top money maker

Ric Flair training for a comeback.

Maybe he can go to AEW and form a trainwreck geezer trio with the Hardys, because Jeff Hardy is about to return too.

Maybe he can go to AEW and form a trainwreck geezer trio with the Hardys, because Jeff Hardy is about to return too.
Click to expand...

He moves a little bit better than Matt when he's not injured or high but he takes 10X as many stupid risks and is thus never healthy.

Jeff has really, really broken down the last few years. Matt has been broken down for a lot longer so it doesn't stand out as much.

Arcademan said:
Hopefully he moves better than his brother Matt because watching him move around against Darby Allin last Friday made MY body ache

Pretty much everybody that started in the 80s/90s needs to hang it up.